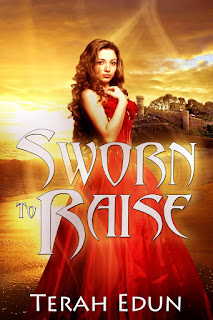 Cover Designed by Kalen O'Donnell
Expected Release: March 15,2013
Seventeen-year-old Ciardis has grown up in poverty, a cleaner in a small vale on the outskirts of the kingdom. But beneath her kingdom’s seemingly idyllic surface lies a hidden secret. Whispers of an inept crown Prince are growing ever louder—intensified by the five year anniversary of the soulbond initiations.

Amidst scandalous whispers, Ciardis finds herself chosen to train for the Companion’s Guild. She leaves her home and sets off on a personal journey to become a Court Companion. A position she’d never thought possible for a lowly servant to obtain, she must prove that she has the skills to attract a Patron.

But she must master those skills quickly. If the legends are true, only Ciardis can harness the power to raise a Prince in an Imperial Court sworn to bring him down.

Terah Edun is an international development professional and author/lover of all things Young Adult Fantasy fiction. She is a native Georgian, adoptive Washingtonian, unrepentant expat currently living in South Sudan, brilliant dreamer, lover of dogs and not-so-closet geek. Her first novel, Red Madrassa, was released on November 8th and her second novel, Sworn to Raise, comes out in March 2013.


This tour was hosted by: