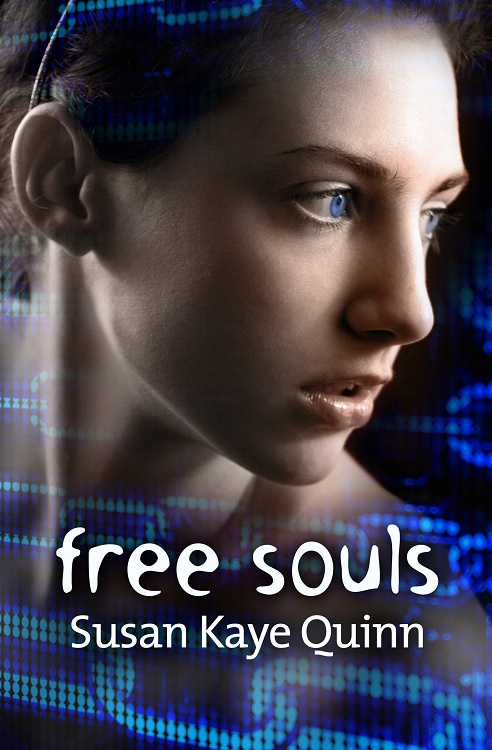 Free Souls by Susan Kaye Quinn
When your mind is a weapon, freedom comes at a price.

Four months have passed since Kira left home to join Julian’s Jacker Freedom Alliance, but the hole in her heart still whistles empty where her boyfriend Raf used to be. She fills it with weapons training, JFA patrols, and an obsessive hunt for FBI agent Kestrel, ignoring Julian’s worries about her safety and repeated attempts to recruit her for his revolutionary chat-casts. When anti-jacker politician Vellus surrounds Jackertown with the National Guard, Kira discovers there’s more to Julian’s concerns than she knew, but she’s forced to take on a mission that neither want and that might be her last: assassinating Senator Vellus before he can snuff out Julian’s revolution and the jackers she’s come to love.

All of the Mindjack stories are available on Amazon, Barnes&Noble, Kobo, and iTunes
Please Note: Free Souls is not yet available on Kobo or iTunes

“Quinn paints a picture of a not-too-distant America where politicians inflame the hatred of one section of the populace for another—all for their own gain—and you worry that her world is not so far off from our own.” -Dianne Salerni author of We Hear The Dead and The Caged Graves.

"Free Souls starts with a bang and doesn't let up. Like a mash-up of all your favorite science-fiction adventures from Star Wars to The Legend of Korra, it blends nonstop action, nail-biting escapes, and great romance. I absolutely loved it! A great series conclusion—a must-read."-Leigh Talbot Moore author of The Truth About Faking and Rouge.

“Susan did it again. Free Souls was WOW! I expected Kira to step up to her role as heroine but not like this. Surprises kept coming until the very end which tied up more loose ends than I knew existed. Warning: Don't start reading until you have time to finish. I didn't want to put Free Souls down for a second. It's that kind of book.” - Goodreads Reviewer Sher A. Hart Want more Julian? Wondering how Sasha's ability really works? Looking for EXCLUSIVE DELETED SCENES from Free Souls? This collection of novellas, scenes, and other goodies is for those craving a bit more of the characters and drama of the Mindjack series.