Kara Magari is about to discover a beautiful world full of terrifying things--Ourea.

Kara, a college student still reeling from her mother's recent death, has no idea the hidden world of Ourea even exists until a freak storm traps her in a sunken library. With no way out, she opens an ancient book of magic called the Grimoire and unwittingly becomes its master, which means Kara now wields the cursed book's untamed power. Discovered by Ourea's royalty, she becomes an unwilling pawn in a generations-old conflict--a war intensified by her arrival. In this world of chilling creatures and betrayal, Kara shouldn't trust anyone... but she's being hunted and can't survive on her own. She drops her guard when Braeden, a native soldier with a dark secret, vows to keep her safe. And though she doesn't know it, her growing attraction to him may just be her undoing.

Excerpt from The Grimoire Saga by S. M. Boyce
The air in the submerged library stalled, stagnant and suddenly heavy. The muscles between Kara’s shoulders tightened, and her neck tensed.
Hidden deep within the desk before her was a thick sheet of parchment paper. Kara set this aside, covered as it was in an illegible, spidery script. The book’s faded red leather was porous and soft, its title written in gold lettering that had long ago begun to chip so that now, only spotted lines comprised the runic letters.
The chains wrapped around the cover like metal vines, and instead of a padlock, they had all been fused together in the book’s center. In this mess of iron was a small silver pendant, hung from a short chain and set into the fused metal like a key in a lock. It was the same symbol that had appeared on the door: a crude four-leaf clover comprised of thin crescent moons. A brilliant diamond glittered from its center.
Her hands inched along the pages trapped beneath the odd lock and brushed the silver vines in the process. The metal burned her fingertips. She dropped the book, which thumped on the desk. Pain shot through her arm.
Someone whispered in her ear.
She whipped her head around and held her breath, but the library was empty and quiet once more. Her shoulders tensed, and her body told her to run, run! But there was nowhere to run to. The library had no door and only one inaccessible window.
Maybe she wasn’t supposed to open the book. The thought alone made her want to open it even more.
She sat in the chair, tore off a bit of her sleeve, wrapped it around her hand, and dug her thumbnail beneath the pendant. It shifted. The cold vines stung her thumb through the fabric, but she gritted her teeth and jiggled the pendant again. The necklace moved above her finger and finally popped. Something else clicked.
The sound of metal slithering over fabric made her freeze. The iron vines unwound themselves and fell from the book, and for the second time that day, she suppressed a scream as inanimate things moved. The metal twisted away, clattering to the floor.
The air thickened again, weighing on her neck. A shiver raced down her back. Her hips pressed into the chair, as if someone was pushing hard on her shoulders. Another whisper chorused in her ear. Even though her breath caught in her throat, she didn’t try to find the source. She doubted anything would be there if she looked.
This couldn’t be real. 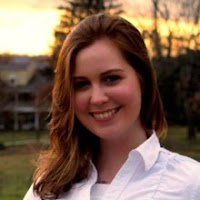 S.M. Boyce is a novelist who loves ghosts, magic, and spooky things. She prefers loose-leaf tea, reads far too many books, and is always cold. She’s married to her soul mate and couldn’t be happier. Her B.A. in Creative Writing qualifies her to serve you french fries.

Boyce likes to update her blog a few times each week so that you have something to wake you up in the morning.