Cover Reveal & Giveaway!! The Chalice of Malvron by Elisabeth Wheatley 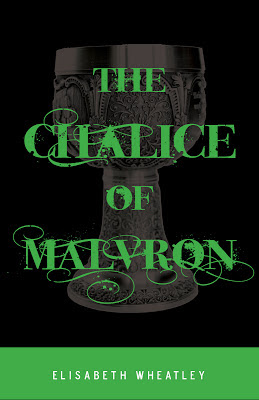 A princess with no recollection of the past eight years. War on the horizon. Who to trust? Who to save?

Sixteen-year-old Janir Caersynn Argetallam wakes, sore and disoriented in the home city of her people, surrounded by relatives who seem concerned for her well-being. As she tries to recover, the Argetallams’ allies, the Stlavish, prepare to unleash a magical relic of untold power against the Argetallams’ age-old enemies, the Brevians. Janir watches silently from the sidelines until she meets a warrior elf and a strange wizard-boy who claim to know her and make her feel…confused. They claim that everything she’s been told is a lie, that her memories were stolen at the command of her father, the Lord Argetallam. As the eve of Brevia’s destruction draws closer, Janir finds herself with the power to stop the Stlavish. Conflicted and confused, she must decide whether she will allow Brevia to be conquered or if she will betray her father and destroy the relic—the Chalice of Malvron…

Elisabeth Wheatley is a high school student homeschooled in the Texas Hill Country. When she’s not daydreaming of elves, vampires, or hot guys in armor, she is reading copious amounts of fantasy, playing with her little brothers, studying mythology, and training and showing her Jack Russell Terrier, Schnay.

***Giveaway***
1 Lucky Winner Will Win A $25 Giftcard
8 Lucky Winners Will Receive 1 Of The Books Mentioned Above!
a Rafflecopter giveaway

If you would like to add or just check out the other books in this series, I've added the links to  Goodreads list below for your convenience:
The Key Of Amatahns (Argettalam Saga #1)   The Secrets Of The Vanmars (Argettalam Saga #2)