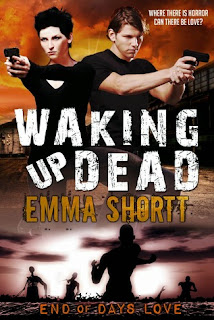 You know your life has hit rock bottom when you’re living off cooked rats and showering once every few months—if you’re lucky. But for Jackson Hart things are about to get a whole lot worse. When her best friend, Tye, disappears hunting for food, kick-ass Jackson’s ‘head south to safety’ plan looks like it’s dead before it’s even begun. But then she meets ex-mechanic Luke Granger, who takes her to his bunker, feeds her with non-rat based food, and offers her protection against the zombie hordes—not that she needs it. She knows how to use a machete and isn’t afraid to.
Jackson was tempted to stay in the city with her rescuer. Food, shampoo and the possibility of finally getting laid, what more could she ask for? But the flesh eaters are getting smarter and the bunker is compromised, so Jackson and Luke have no choice but to make the journey south.
Luke and Jackson team up to find other humans in a road-trip romance for the ages. They travel for thousands of miles with zombies shadowing their every move. They must utilize every resource at their disposal…and then some. On the way, they discover that even if flesh eating zombies are knocking down their door, there’s always time for sex and even love.

A Word from the Author:

Welcome to the #entangledzombieinvasion release week competition, and a big thanks to Blood, Sweat and Books for hosting me!

Just in time for Halloween we’re celebrating the release of my debut novel, Waking up Dead, and it’s all about the zombies… Of course where the undead roam a zombie slaying kit is so needed, and do I have a fab one for you!

Axe: check
Flashlight: check
Super hunky guy to fight the zombies with: not quite…

You can, however, find that super hunky guy in-between the pages of Waking up Dead, and if you’d like the get-your-slay-on kit too, or a signed copy of Waking up Dead, or even a $25 Amazon gift card enter the competition below. You get extra points for tweeting and extra again for heading over to Facebook and liking my author page.

Here’s a sneak peek of Waking up Dead…

Without a doubt the house with the pretty green shutters had food inside of it. Pasta, canned vegetables, tinned meats, hell, it could have a five course, good-to-go, gourmet meal in there for all Jackson Hart knew. Crouched down behind an overturned SUV she could practically hear it all screaming from inside the pantry, and she narrowed her eyes as she assessed the best way to get at it.

Not through the front door. It was probably barred tight with planks of wood, or barricaded with piled-up furniture. Maybe through the back? But the skinny, shadowed alleyway that ran between the house and its fence screamed, horror movie showdown, and for all Jackson knew she’d be risking it only to find a blocked-up back door too. The shutters then. How thick were they? Was the glass behind them intact? Jackson hefted Mandy-the-machete and considered the possibilities.

“You’re looking thoughtful there. For the record it doesn’t suit you.”

Those words came from Tyrone, her friend, her only friend, if you wanted to get right down to it. He joined her behind the SUV, swinging his ax as he did so, and making absolutely no attempt to stay hidden.

“I was being stealthy,” Jackson said with a sigh. “You totally just ruined it.”

“Stealthy for who?” he asked. “The rats? There’s only them and us. We checked the street. It’s all quiet.”

Jackson frowned as she looked away from the house and down said street. A backpack, probably a child’s by the size of it, caught her attention, and she frowned as she noticed what looked like a rusty toy truck sticking out of the zipper. The things people had thought to take when they tried to run…it still baffled her.
“Quiet or not, they’re here somewhere,” she said softly. “It’s been almost a day since we saw any of them.”

Jackson almost laughed. “Might as well wish for a working car.”

“I do, sweetheart. Daily. We’re surrounded by wheels and not one of them worth a damn.”

“Two years and then some pretty much kills everything.”

“Everything but us,” Tye said.

Jackson nodded slowly at the truth of those words, tore her gaze away from the truck, and pointed her machete at the shuttered house. “Enough with the reminiscing. Take a look at that.”

Tye’s gaze followed the line of the blade. A frown spread across his face as he assessed the building from top to bottom. “It looks…”

“Weird isn’t it?” Jackson said. “I don’t know about your end, but down there,” she tilted her head to the south of the street, “the rest of these million-dollar houses are rocking the post apocalyptic- makeover vibe. Broken glass, doors hanging off their frames, trash all over the place.”

“And this one stands alone,” Tye said, his frown deepening. “Could be Obama’s. I heard he has a house around here.”

“Had, had a house,” Jackson said. “And I’m pretty sure the dead do not make dining distinctions based on fame, or,” she added when Tye opened his mouth to speak, “government office.”

“Unless he went rogue in the beginning. He could still be hanging around.” Tye paused and shook his head. “That’s a weird thought.”

“Weird but not outside the realms of possibility,” Jackson said. “Hence the stealth you just ruined. Something is off, and we can’t ignore it. If there’s food anywhere, it’s hidden in that house. The rest have been picked clean, and this one looks like it’s been protected.”

Tye shot her an incredulous look. “You’re seriously not suggesting there are actual people inside?”

She snorted. “Yep, I’m betting there’s a whole family just waiting to open their arms to us. They’ll have a meal all laid out, hot baths running—”

“Sarcasm is the lowest form of wit, Jack.”

Jackson shook her head. “You goad me into it. Seriously though, I’m thinking there were people still living in there. Not for a while and not now,” she added, holding up her free hand to halt whatever words Tye had been about to say, “but maybe they lasted out longer than the rest of the street. It’d explain why things look different. Better yet, it might mean food.”

Tye stomach gave a grumble. It was far louder than it should have been and Jackson caught his eye. “Keep it down. That was loud enough for a pack to hear.”

“Can’t help it,” he said. “You keep talking about food. When was the last time we ate, for fuck’s sake? I still can’t believe the university campus was picked clean.”

“It’s crazy,” Jackson agreed, thinking of all those dorm rooms they’d crept through. Each had been viler than the last, full of blood and pus and a million other unidentifiable fluids. Worse, they’d stunk of teen sweat, though how that could be two and more years after those rooms had last been occupied, Jackson didn’t know. “Took a brave person indeed to wander those rooms and clean them out,” she added. “End of the day though, it doesn’t leave us much choice but to hit up Creepyville here. We need some calories in our system as soon as possible, and I’d rather not chow down on rat again.”

“There’s nothing wrong with rat.”

“There’s so much wrong with it I can’t even begin.” She swung

Mandy in the direction of the biggest window, forcing Tye to lean back to avoid the super-sharp blade. “I’m thinking we go through the shutters there. We’ll chop through them and then the glass too if there’s any left.”

“That’ll make a bit of noise.”

“Less noise than trying to go through the front door. You know it’ll probably be barricaded up, and besides, didn’t you just say we were okay?”

“I said we are okay for the moment. Let’s not push our luck any more than we have to.”

He hefted his ax, giving it a swing of what Jackson assumed was agreement. “I’m always quick, sweetheart.”