A broken promise is all it takes.

Becoming an E.K isn’t a choice for Serena – it’s a necessity to survive. To destroy the Elementals she has to leave her old life behind. She has to train and follow a strict regime. But with time against her, she has only a few weeks to master the skills Kai spent his whole life perfecting.

The knowledge passed down from her ancestors is crucial to the Elementals demise and the success of their mission. However, the path they must follow is lined with riddles, each more confusing than the next. It doesn’t matter how close to succeeding they get, it’s never enough. The Elementals are one step ahead at every revelation and that can only mean one thing – the E.Ks have a traitor among them.

“Have you ever
been swimming here?” I asked moving my head to watch his reaction as I brought
my feet up out of the water and folded them beside me.
“Yeah, most
summers when I came here. We all used to use it as a way to cool off or just
have some fun in between training.”
“How about
skinny dipping?” I asked my grin growing due to the thoughts running through my
head.
“Why? You want
to try it?” he challenged.
“Only if you go
first,” I laughed but stopped instantly when he removed his shirt and tossed it
behind us. My eyes widened in surprise and I started to regret my words.
“You’re not being serious are you?” I stuttered as he pulled off his shoes,
throwing them over to where his shirt was crumpled.
“You can’t chicken
out now Rea. It was your idea,” he said smiling as he removed each sock,
teasing me as they ended up with the rest of his discarded garments.
I just stared at
him, my lips moving but not making a sound as I tried to find an excuse.
He laughed at
me. “Relax Rea, I’m just teasing you. Well unless you’ve changed your mind. In
that case I’m being deadly serious.” He had a cheeky grin on his face as he
spoke and I pushed him hard, toppling him into the water below.
There was a lot
of splashing but Kai surfaced finally, taking a deep breath as he flicked the
hair out of his eyes. I was clutching my stomach in fits of laughter as I bent
over. The shock on his face was priceless.
“Oh you are so
dead Rea, so, so dead,” he said, his voice ragged as the cold water and shock
affected his half naked body. I just continued to laugh as he floated in front
of me, his head bobbing up and down in a comical way.

The world is dangerous – but love will kill you.

Little did Serena Jackson know that one simple, flirty remark to an anonymous guy online would lead to her world being changed forever.

She doesn’t know him, but inexplicably, is drawn. She knows it is wrong but she agrees to meet.

His real name is Kai. He is beautiful. And immediately Serena feels herself blindly falling for him even though she senses a lie. She knows he is hiding something and it terrifies her.

What she doesn’t realise is that her entire life has been built on secrets and lies. The people she loved left her in the dark for a reason.

She trusted them. She trusts Kai. But as he pulls her straight into the heart of the danger the lies and deadly secrets are revealed. They overwhelm her, and the person she once was no longer exists as she is thrown into a ruthless world of elemental forces. The price of truth is her life—and now the world wants her dead.

“I couldn't put it down. So I finished it last night and all I can say is WOW! This book was amazing and different.” Brianna (Book Blogger)

“I loved how the author took a different approach to writing a love story in modern times with the paranormal element present. I thought it was absolutely wonderful and refreshing. Marvelous!” Kathy H (Amazon Reviewer)

“In the end I had fallen in love with this story…completely untraditional it was a very original idea, not to mention modern. This story had such a good plot and the story structure was sound.” Kacii – The Kooky Bookworm (Book Blogger) 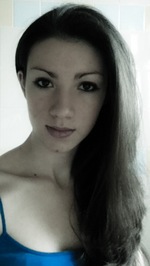 Mia Hoddell lives in the UK with her family and two cats. She spends most of her time writing or reading and loves anything paranormal. Mia always had a love of writing but never reading. She was more interested in sports and hated sitting still - despite getting three poems published before the age of sixteen. Finally though, she found some novels that captured her interest and developed a love of reading which is now one of her favorite hobbies.

Mia began with poems before moving on to short stories. Although she enjoyed this, Mia found she had too much to tell with too little space, so later on she created her first series 'The Wanderer Trilogy' and from there other ideas have emerged. With a total of nine books planned at this moment, she is busy working on her second series 'Elemental Killers' before moving onto the next idea on her ever growing list