Welcome to my stop on the Mad World: Desperation blog tour hosted by CLP Blog Tours.
To follow along with the rest of the tour, click the button above! 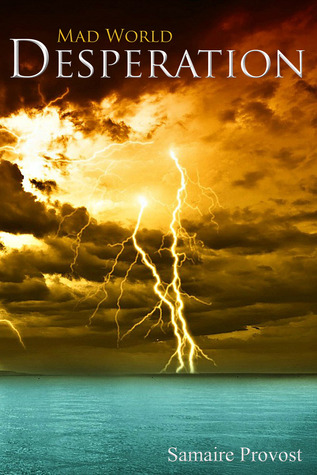 “Forget what you thought you knew about this story, because everything is about to change."
With Alyssa near death, Luke, Jacob and their companions make a desperate attempt to reach Boston with the final ingredient needed for the plague antidote. They must travel through the Canadian wilderness, some of the roughest country in North America. Along the way they are joined by new friends and old as they fight to reach their destination and save Alyssa. What they don’t know is that something is hunting them.

Something evil is lurking, waiting to strike when they least expect it.

After years of fighting courageously against the living plague, they’d thought they knew their enemy. They’d believed their wits, bravery and strength would be enough to win this fight against the threat that had overrun so much of the world they once knew. But they were wrong.

Now Luke, Risa, Jacob, DeAndre and Jonathan face their most dangerous trials yet as they battle the ever-present zombie threat, along with a new challenge they never saw coming.

Samaire Provost lives in California with her husband and son. Her love of paranormal stories, odd plots, and unique tales as well as the works of Neil Gaiman, Terry Pratchett, Susan Cooper, Madeleine L’Engle and Stephen King has deeply influenced her writing. Her upcoming work is a vampire thriller slated to be released in early 2014.


**Everyone who leaves a comment on the tour page will be entered to win a $20 Amazon gift card! Anyone who purchases their copy of Mad World: Desperation before  December 16 and sends their receipt to Samantha (at) ChickLitPlus (dot) com, will get five bonus entries.**
Blog Tour Desperation Horror Mad World Review Samaire Provost Zombies