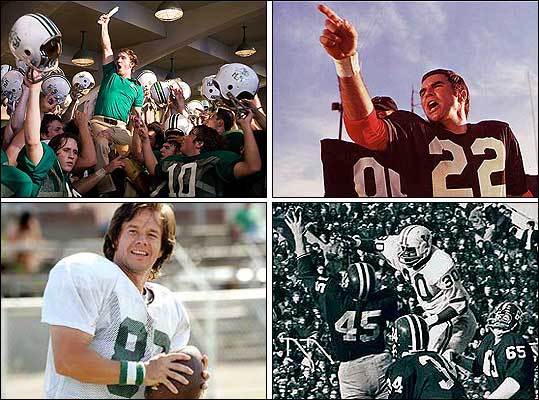 Super Bowl Sunday is right around the corner *woot,woot*.  To help get you in the mood for tailgating,touchdowns and halftime shows I've compiled a list of movies with a Football theme for your viewing pleasure.

Gridiron Gang is a 2006 movie starring Dwayne "The Rock" Johnson as Sean Porter a disgruntled prison guard who wants to help the teenage inmates he's been tasked to watch over. He creates a Football team called The Mustangs and successfully takes them to the State Championships. The film is loosely based on the true story of the Kilpatrick Mustangs during their 1990 Season. The Waterboy is a 1998 sports comedy starring Adam Sandler as Bobby Boucher a socially awkward,stuttering,water boy with hidden anger issues. Bobby goes from Waterboy to one of the most feared linebackers on the field despite setbacks caused by the  constant teasing of his teammates and excessive smothering by his mother, Helen.

Remember the Titans is a 2000 drama starring Denzel Washington as Herman Boone Head Coach to a racially divided team at T.C. Williams High School located outside Washington D.C. during the early 70's.
Boone is told by a member of the school board that if he loses even a single game, he will be fired. Subsequently, the Titans go through the season undefeated while battling racial prejudice, before slowly gaining support from the community. The film is based on a true story.

Rudy is a 1993 Drama starring Sean Astin as Daniel "Rudy" Ruettiger. Rudy dreams of playing for the Notre Dame Fighting Irish football team thoug he lacks the grades and money necessary to attend Notre Dame, as well as the talent and physical stature to play football for a major intercollegiate program. Rudy overcomes all odds including losing his Fiance and a dyslexia diagnosis to find himself not only attending the college of his dreams but also earning the respect of students and players alike. This film is based on a true story.

I hope you enjoyed some of my Super Bowl Sunday movie recommendations.

Have you seen any of the films listed above?
If so, which one(s)?
Any not listed you recommend I watch?
Leave your answers in the comments below! I love to read your responses.
Comedy Drama Football Movie Recommendations Movies Super Bowl Sunday True Story