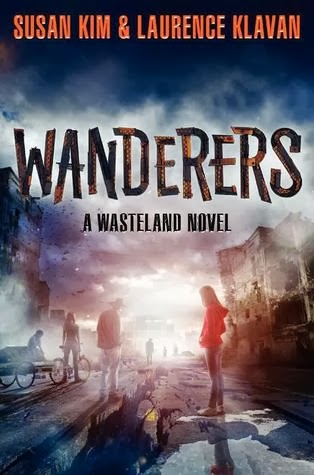 The former citizens of Prin are running out of time. The Source has been destroyed, so food is scarcer than ever. Tensions are rising…and then an earthquake hits.

So Esther and Caleb hit the road, leading a ragtag caravan. Their destination? A mythical city where they hope to find food and shelter-not to mention a way to make it past age nineteen.

On the way, alliances and romances blossom and fracture. Esther must rally to take charge with the help of a blind guide, Aras. He seems unbelievably cruel, but not everything is as it seems in the Wasteland.…

In this sequel to Wasteland, the stakes are even higher for Esther, Caleb, and the rest of their clan. They're pinning all their hopes on the road...but what if it's the most dangerous place of all?

About the Author(s)
Susan Kim & Laurence Klavan cowrote the graphic novels City of Spies and Brain Camp. Susan is also a five-time Emmy nominee for her work in children's television and a Writers Guild Award winner for best documentary. She wrote the stage adaptation of Amy Tan's The Joy Luck Club, teaches writing at Goddard College, and is a blogger for the Huffington Post. When Susan was little, her family spent a lot of time on the road. Susan enjoyed it, but it made her anxious. In Wanderers, Susan explores her worst fears about being far from home and having to rely on people you don't even know, much less trust.


Laurence has also written the novels The Cutting Room, The Shooting Script, and the Edgar Award-winning Mrs. White and a short-story collection. He received two Drama Desk nominations for the book and lyrics to Bed and Sofa, a musical produced by New York's Vineyard Theatre. Laurence likes being in new places but finds the actual traveling to be challenging and even frightening. Will the plane crash? Does the car have enough gas? Esther and her friends are on their way to being grown up—age nineteen. The idea in Wanderers was to portray their journey and make it just as dangerous, thrilling, and fun as being there.
Laurence Klavan March 2014 Post Apocalyptic Review Science Fiction Survival Susan Kim Wanderers Wasteland Young Adult