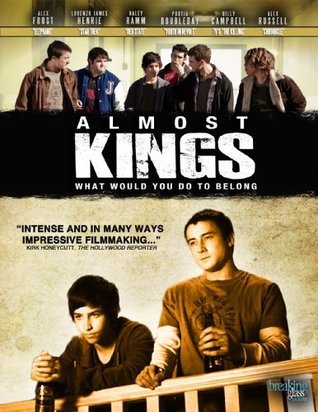 Almost Kings by Max Doty [Purchase]
With their father lost in anger and self-loathing, James "Truck" Wheeler has raised his younger brother Ted as best as he could, considering he's just a teenager himself. In return, Ted idolizes his brother.

Now, during their one year of high school together, Ted will realize there are troubling aspects to Truck and his friends, The Kings. When the boys assign numbers to each girl at school and begin a dark contest, Ted will be caught playing a game that targets his best friends, including the girl he loves: Kallea Whitney.

Summer Unplugged by Amy Sparling [Purchase]
Bayleigh is addicted to her cell phone and her mom has had enough. After catching her sending a less than lady-like photo to a boy who barely knows her, Bayleigh's mom sends her away to her grandparent's house for the summer--sans cell phone, laptop and Ipod. Bayleigh thinks the summer will be torture without social media...that is until she meets the boy next door.

Significance by Shelly Crane [Purchase]
Maggie is a seventeen year old girl who's had a bad year. She was smart and on track, but then her mom left, her dad is depressed, she's graduating - barely - and her boyfriend of almost three years dumped her for a college football scholarship. Lately she thinks life is all about hanging on by a thread and is gripping tight with everything she has.

Then she saves the life of Caleb and instantly knows there's something about him that's intriguing. But things change when they touch, sparks ignite. Literally.

They imprint with each other and she sees their future life together flash before her eyes. She learns that not only is she his soul mate, and can feel his heartbeat in her chest, but there is a whole other world of people with gifts and abilities that she never knew existed. She herself is experiencing supernatural changes unlike anything she's ever felt before and she needs the touch of his skin to survive.
Now, not only has her dad come out of his depression to be a father again, and a pain as well, but Caleb's enemies know he's imprinted and are after Maggie to stop them both from gaining their abilities and take her from him.

Weighted (The Neumarian Chronicles 0.5) by Ciara Knight [Purchase]
The Great War of 2185 is over, but my nightmare has just begun. I am being held captive in the Queen’s ship awaiting interrogation. My only possible ally is the princess, but I’m unsure if she is really my friend or a trap set by the Queen to fool me into sharing the secret of my gift. A gift I keep hidden even from myself. It swirls inside my body begging for release, but it is the one thing the Queen can never discover. Will I have the strength to keep the secret? I’ll know the answer soon. If the stories are true about the interrogators, I’ll either be dead or a traitor to my people by morning.

Light as a Feather, Stiff as a Board by Zoe Aarsen [Purchase]
McKenna Brady thinks her junior year of high school is going to be the best ever when she’s welcomed into the elite group of popular girls at Weeping Willow High School led by blond, gorgeous Olivia Richmond. Prior to junior year, McKenna was known in her small town as the girl whose twin sister died in a tragic house fire, and she’s overjoyed at the prospect of redefining her identity. She has a date to the Homecoming dance with Olivia’s handsome older brother, and a good chance of being elected to student council. For the first time since McKenna’s parents divorced, things are looking up.

But everything changes the night of Olivia’s Sweet Sixteen sleepover birthday party. Violet, the shy, mysterious new girl in town, suggests that the girls play a scary game called Light as a Feather, Stiff as a Board, during which Violet makes up elaborate stories about the future ways in which beautiful Olivia, brassy Candace, and athletic Mischa will die. The game unsettles McKenna because she’s already escaped death once in her life, but she doesn’t want to ruin her friends’ fun. It’s only a game, she reminds herself.

But it doesn’t seem like a harmless game a week later when Olivia dies unexpectedly in a violent car crash, exactly as Violet predicted. And something begins haunting McKenna’s bedroom at night, leaving her clues that all seem to point to Violet. McKenna enlists the help of her cute next-door neighbor Trey in finding out exactly what kind of curse Violet has put on all of the popular girls in the junior class. As Violet rises to popularity and seemingly steps into the life Olivia left unfinished, McKenna and Trey know they only have a limited amount of time to bring an end to Violet’s game before more lives are lost.

Lacrimosa by Christine Fonseca [Purchase]
Some sacrifices should never be made, even for love.

Nesy is the best of an elite group of angels, warriors called Sentinals, charged with one job—vanquish the UnHoly. She’s never made a mistake, never gotten emotionally involved, never failed.
Until she comes face-to-face with Aydan.
He is evil incarnate. A fallen angel that feeds off the souls of others. Everything Nesy is supposed to hate. But she can’t, because he’s also the human love of her life; a love she was never supposed to feel.
Now she must choose between doing her duty or saving Aydan, a choice that will cost more than her life...
Or his soul.

Barely Alive by Bonnie R. Paulson [Purchase]
In twelve weeks, seventeen-year-old Paul Ledger will be dead. At least he hopes so.

Paul is trapped in the worst cult the United States has ever seen. Infected with a zombie virus, symptoms culminate in a dead body but thriving mind over a course of twelve weeks. If he doesn’t earn the final death he longs for, he’ll be chained in a basement facility, moaning for human flesh for eternity.

Sent out to kidnap girls for food, toys, or whatever the boss wants, Paul nabs Heather McCain. He’s not a fan of humans as a general rule, but even his graying skin and insatiable hunger for her flesh don’t stop her from reaching out to him. Give him the second chance he doesn’t know he needs.

Overcome by his cravings, Paul bites her delectable skin. Amazingly, she doesn’t develop the zombie-like side effects. When the boss discovers Heather’s immunity, he gives Paul an ultimatum – deliver up Heather and her family to continue the research or watch as Paul’s brother suffers the zombie fate.

Paul has a chance to endure his short zombie existence knowing his brother is safe. But he’ll have to sacrifice Heather to do it.

*Authors Have an upcoming book that will be FREE let me know, I'd love to feature your work in my post.
Contemporary Ebooks Fantasy Freebie Friday Kindle Paranormal Young Adult