Life Among the Dead by Daniel Cotton [Purchase]
There are over a million people in the city of Waterloo. Today, most of them have died, and now they are hungry. Corporal Dan Williamson is caught in the middle of the outbreak. He is desperately trying to reach his wife who is somewhere amid the urban decay. There are other souls out there, other tales of survival among the horror. Dan will soon learn that the living may prove to be an even bigger threat than the dead.

Reign of Blood by Alexia Purdy [Purchase]
Never tease anything that wants to eat you.

My name is April Tate and my blood is the new gold. Vampires and hybrids have overrun my world, once vibrant with life, but now a graveyard of death shrouded in shadows. I fight to survive; I fight for my mother and brother. The journey is full of turns that I am quite unprepared for. And I'm just hoping to make it to the next Vegas sunrise..."

In a post-apocalyptic world, a viral epidemic has wiped out most of the earth’s population, leaving behind few humans but untold numbers of mutated vampires. April is a seventeen-year-old girl who lives in the remains of Las Vegas one year after the outbreak. She has become a ferocious vampire killer and after her family is abducted, she goes searching for them. What she finds is a new breed of vampire, unlike any she has seen before. Unsure of whom she can trust, she discovers that her view of the world is not as black and white as she once thought, and she's willing to bend the rules to rescue her family. But in trying to save them, she may only succeed in bringing her fragile world crashing down around her.

Banded by Logan Byrne [Purchase]
In dystopian Manhattan, society is divided into six zones, with each one representing a citizen’s benefit to society: Stalwart (strength), Astute (intelligence), Collusive (greed), Radiant (beauty), Quixotic (no life direction), and the Altruistic (willingness to help others). On a citizen’s sixteenth birthday, a computer suggests a new zone for them based on their inherent benefit to society. When Kalenna Slater is sorted out of her home zone Quixotic and into Altruistic, she thinks things can’t get worse. Life looks dismal until she meets Gavin, a boy also just sorted into Altruistic who becomes the light needed on her cloudy days.

During sorting she receives a device known as ‘The Band’. It’s a large watch-like device that never comes off, and it measures a citizen’s karma on a scale from one to one hundred. If a citizen does good, they gain points. If a citizen does bad, including breaking laws, they lose points. When your number reaches zero, the band acts as judge, jury, and executioner, and you are injected with toxins that kill you within minutes.

After sorting, recruits are taken to a three month long mandatory school named HQ. It’s at HQ she meets new friends from different zones, and finally begins to feel at ease. Everything goes well until a rare trip home makes her discover that her father, who has been missing for a decade, may have taken part in a terrible program that stands to shake the fabric of society. 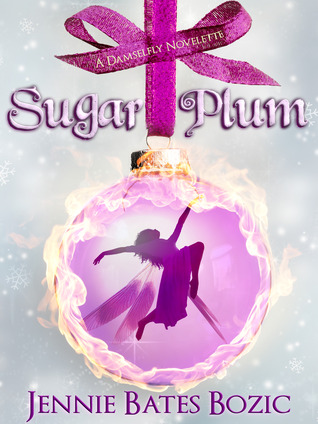 Sugar Plum (Damselfly 0.5)by Jennie Bates Bozic [Purchase]
At six inches tall with gorgeous purple wings, seventeen-year-old Sugar is the spitting image of a fairy - and that makes her the perfect spy.

It’s the year 2081 and the USA hasn’t been united for five years. Now it’s divided into three bitterly feuding sections - the West, the East, and the Mids, and thousands of families have been separated by the conflict. In order to figure out how spies are crossing from the right coast, the West is targeting caravans of families crossing the Mids illegally. Trouble is, the crossers are hard to track, and that’s where Sugar comes in.

Every week, she and hundreds of others like her are packaged as Christmas tree ornaments and “donated” to poor children. If they’re lucky, they’ll end up with a crosser kid and dig up valuable information about the clandestine caravans while their wings serve as a tracking device. If not, they fly back to the Candy Factory for reassignment. Wash, Rinse, Repeat until they’ve served enough missions to earn their freedom.

When Sugar is placed with a crosser kid named Clara, she quickly discovers that the conflict is more complicated than she thought. Clara’s uncle and his family were assassinated and now her parents are running for their lives. Every second that Sugar remains with the family, she puts them in danger. If she leaves, she’ll surely be caught and lose any chance at freedom. If she stays, she might lose everything.

The Former World by Jessica Grace Coleman [Purchase]
Twenty-one year old Beth Powers is fed up with living in the tiny, gossip-fuelled village of Little Forest and resolves to escape to London with best friend, Veronica Summers.That is, until the body of Beth's colleague Emma Harris is found in the nearby woods, setting off the small community's well-oiled rumour mill. Beth soon finds herself in the middle of a bizarre village conspiracy: was Emma's death really accidental? Why are Beth's nearest and dearest cutting her out of their lives? And what does it all have to do with the conveniently-timed arrival of handsome new resident, Connor Maguire?

With the help of new ally Will Wolseley, Beth delves into the village's sinister secrets and uncovers a terrifying truth about herself that could change her life forever.


Will Beth decide to leave her childhood home for good? And, more importantly, will Little Forest let her go?

The Shadow Prince (Mortal Enchantment 0.5) by Stacey O'Neal [Purchase]
Every sacrifice has consequences.

Sixteen-year-old Rowan has spent most of his life living among the mortals—learning to control the element of fire, impatiently awaiting the day his vengeful mother, Queen Prisma, will abdicate her throne. When he finally returns to Avalon for his coronation, his mother insists he must first prove his loyalty to the court by completing a secret mission:

Willing to do anything to remove his mother from power, he agrees to sacrifice the halfling. He returns to the mortal world with his best friend, Marcus, determined to kill the princess. But as he devises a plan, he starts to question whether or not he's capable of completing such a heinous task. And what price he will pay if he refuses?

*Authors Have an upcoming book that will be FREE let me know, I'd love to feature your work in my post.
Ebooks Freebie Friday Kindle Paranormal Science Fiction