Warning - Adult language and situations - recommended for ages sixteen and above.

The Coveted (The Unearthly #2) by Laura Thalassa [Purchase]
“In places that know more about heaven and hell than we do, you have a reputation, Gabrielle. To them you are known as the devil’s consort.”

When a body shows up near Peel Academy, all signs indicate the killer is a vampire. Ravaged throat, body drained of blood. At least that’s all it appears to be when the Politia, the supernatural police force, assigns Gabrielle to the case. Now it’s Gabrielle’s job to figure out who did it.

But after a second body turns up with the same lethal wounds, it’s clear that a serial killer is stalking the island. The murders have compromised the truce between the Politia and vampires, and as long as the killer roams free, it is in danger of dissolving. If that happens, no vampire is safe from persecution, not even Gabrielle.

Now Gabrielle must team up with Andre, her soulmate and the one person she’s tried to stay away from, to investigate the murders before the truce dissolves. And keeping her distance is proving to be impossible.


But Gabrielle has a bigger problem. The world of the dead know about her, and their whispers hint that something is coming for her. And it’s coming soon.

A Gift of Ghosts by Sarah Wynde [Purchase]
Akira Malone believes in the scientific method, evolution, and Einstein's theory of relativity. And ghosts.

Zane Latimer believes in telepathy, precognition, auras, and that playing Halo with your employees is an excellent management technique. He also thinks that maybe, just maybe, Akira can help his family get in touch with their lost loved ones.

But will Akira ever be able to face her fears and accept her gift? Or will Zane's relatives be trapped between life and death forever?

Lichgates by S.M. Boyce [Purchase]
Kara Magari is about to discover a beautiful world full of terrifying things—Ourea.

Kara, a college student still reeling from her mother’s recent death, has no idea the hidden world of Ourea even exists until a freak storm traps her in a sunken library. With no way out, she opens an ancient book of magic called the Grimoire and unwittingly becomes its master, which means Kara now wields the cursed book’s untamed power. Discovered by Ourea's royalty, she becomes an unwilling pawn in a generations-old conflict—a war intensified by her arrival. In this world of chilling creatures and betrayal, Kara shouldn’t trust anyone… but she’s being hunted and can’t survive on her own. She drops her guard when Braeden, a native soldier with a dark secret, vows to keep her safe. And though she doesn’t know it, her growing attraction to him may just be her undoing.

A Glimpse of Her Soul by Stuart Jaffe [Purchase]
When 16-year-old Gillian Boone discovers that a secret message has been etched into her soul, her world of normal teenage life is destroyed. Now, bizarre monstrosities seek to kill her so they can read this message as her soul departs and use its information to escape back to the world they came from.

Though she has the aid of her father and some new friends, there is only one who has the real power to help. A rogue monster named Jackhammer Jack. But he might want her secret, too, even as he helps her evade the clutches of those pursuing her. With threats surrounding her, Gillian will have to lead her allies in a struggle for survival - a struggle all the more treacherous when her allies are just as dangerous as her enemies.

Filled with action, excitement, magic, romance, and mystery, A Glimpse of Her Soul is a pulse-pounding ride you're sure to enjoy. And just the kind of genre bending you've come to expect from a writer whose motto is Fantasy Knows No Bounds!

Interfaced by Emerson Doering [Purchase]
Brain-Machine Interfacing is making telekinesis a reality for a select few.

Three months ago Kristen Crede was a typical college kid looking forward to the weekend’s bonfire party at the beach. Now she’s a triple amputee, outcasted after an accident that shattered her body and spirit. Doc Prophet convinces her to be the first patient of triple prosthetics controlled remotely by a wireless neural implant.

Except the implant is not as it should be. Disquieting things happen as she learns to reach with her mind, and the only person who seems to know all she’s capable of is a menacing stranger. If Kristen doesn’t do exactly what he says, he’ll hurt her family. If she does what he wants, she’s as good as dead.

Lush by S.L. Baum [Purchase]
Bluebell has spent the last twelve years of her life at Training Tech, the government-run boarding school all children are required to attend. Now that she's seventeen she is fully prepared for Incorporation; a time when females and males are allowed to mingle again, for the first time since they were toddlers. It is also the day she must endure Citizen Branding - the mandatory searing of a mark into the flesh of the left wrist of all new Citizens. O for fertile, X for infertile. The fate of every Citizen, male or female, is determined by the results.

Bluebell knows that a Citizen’s duty is to live for the glory of Concord, just as she was taught. But the frantic dreams and hazy memories that haunt her make her different, and the questions she cannot deny threaten to turn her world upside down. 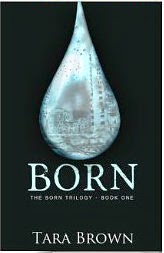 Born by Tara Brown [Purchase]
Emma ran when her daddy told her to. She hid like he said she should. He was the first person she turned her back on. The first one she let die.
Ten years has gone by and she still lives by the simple rules he taught her when she was nine years old.

"Don't help anyone. Don't go where other people are unless you have to. Trust no one. Always pull the trigger."

Until one night she hears the worst sound in the world, a knock. A simple, timid knock, on the door to her cabin.
Only the voice of the brave little girl, ready to die for her brother, persuades Emma to open the door.
As her fingers turn the lock, she has a terrible feeling she will regret her decision.
But even as regret fills her world, so do love and companionship. Things she never imagined she would ever have again.

Everything comes at a cost, you decide what you'll pay.

Breaking Rules by Tracie Puckett [Purchase]
Sometimes, the lessons of childhood are damaging enough that, by eighteen, you’ve figured out some rules so you don’t repeat your parents’ mistakes. For Mandy, that meant finishing her last year of high school, going to college, and then returning to small-town Sugar Creek to live a solitary life as a writer.

That was the plan, and her main rule for avoiding complications and staying on track was to never, ever, EVER let someone get too close.

That was before she met Gabe.

And when Gabe starts to awaken emotions she’s never experienced, Mandy suddenly begins to question every belief she’s ever had.

She can’t be falling in love, can she? That would be the biggest mistake of her life, wouldn’t it? Could she break one of her most important rules—for Gabe?

Perilous by Tamara Hart Heiner [Purchase]
Detective Carl Hamilton is called out on a homicide case, where the partially decayed body of an unidentified teenage girl is found along a remote highway. . . . Weeks before, Jaci Rivera join her best friends Callie, Sara and Amanda for a night of pizza and shopping. But an evening at the mall turns into a terrifying twist of events that drives Jaci and her friends 2000 miles across the Canadian border.

*Authors Have an upcoming book that will be FREE let me know, I'd love to feature your work in my post.
Ebooks Free Freebie Friday Kindle Paranormal Science Fiction Young Adult