Review: All is Silence by Robert L. Slater 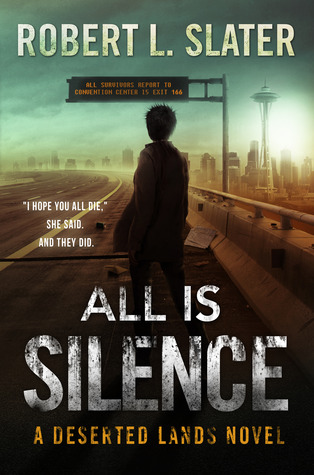 In a future that could be ours, Lizzie, a suicidal teen-age girl, barely navigates her own life. Then everything falls apart. In an apocalyptic land nearly deserted by disease, she lacks reasons to live until a shocking turn of events reveals a phone number. Her call pulls her dangerously cross-country to meet a stranger she thought was dead.

In a world where there is plenty of food, plenty of gas, plenty of space… fear, anger and a lust for power still control the patterns of human life.

Review
All is Silence follows the story of a girl named Lizzie who survives a catastrophic worldwide pandemic. With friends and an unlikely companion in tow,Lizzie sets out across the now barren United States to seek out the father who abandoned her as a toddler hoping against hope that he somehow survived like herself.
When I started reading All is Silence I wasn't quite sure what to expect. I knew the story was about a Pandemic sure and that not all who survived were right in the head but I guess I assumed that meant Zombies not just addle minded people. However, despite my assumptions being wrong, that didn't deter me one bit from enjoying the story.
One of things I really enjoyed about All is Silence was how epic the journey felt. This book had a Stand-like quality to it that I liked. I also enjoyed seeing parts of the country usually left unexplored in books. It seems most stories set in the end of the world follow a southern route so it was nice to see States like Utah and Colorado get some love.
I also really liked the character Spike whom after surviving the Pandemic (at least that's the assumption) behaved more like a Dog than a man. I loved Spikes journey from this almost feral being in the beginning to beloved member of the group by books end. The relationship Spike had not just with Lizzie but with a character named Charley brought some of the most touching and heartbreaking moments of the book.
Lastly, I really liked that Lizzie was a survivor. While I didn't always like her character (she's pretty frustrating at times) I did admire her willingness to put herself in danger to help someone else. Of course this did give her an almost martyr like complex and again that was pretty frustrating, still, out of all the female characters I liked her the best and think she didn't deserve half the flack given to her by her so called “friends” the majority of the time. I didn't see her as selfish just a bit one track minded and you know, that's not necessarily a bad thing when it comes down to it.
Now although I did enjoy the majority of All is Silence some things were less than desirable than others and I felt that they should be mentioned.
First off, I really hated how long the story was. Yes, I understand that this was an epic journey across country but you can convey the long miles without actually showing all of them. It's not that the extra length made the story bad per se but it did lag in many places and during those times I'd think to myself how much better the story would've been had the Author truncated some things.
Secondly, I didn't like Zach. He was all happy to be up in Lizzie's business but as soon as someone more willing came along he just changes ships like that. Yet, throughout the story it is made pretty darn clear that it is actually Lizzie who holds his heart. There is nothing worse than a guy who wants not only the cake but to eat it too. I wish authors would realize that it is OK to keep a character single while the person they are pursuing figures things out. I mean what did he expect? She had just lost her entire family, had been alone for however many weeks and then suddenly finds herself in a very complicated relationship which she certainly wasn't ready for but she's the “bitch” for rebuffing him. Had he taken a moment to let her sort out her feelings I'd bet she'd have been more receptive to the relationship and if not after a reasonable amount of time had passed then finding someone else wouldn't of been so bad.
Lastly, I didn't like how everyone kept calling Lizzie crazy or selfish whenever she seemed to have any independent thoughts or ideas apart from the group. Lizzie sacrificed so much for her friends but when she needed them it was screw her she's crazy. They just weren't really all that nice to her and I don't see why they were even friends in the first place.
Final Thoughts
Despite the stories few faults I'm extremely happy having read All is Silence. Yes the story was clunky in places and the characters could be frustrating at times but overall it was a solid read and I for one will definitely be picking up the sequel whenever it releases next year.
With that being said, I'll be rating All is Silence by Robert L. Slater ★★★★.
*Copy reviewed purchased. All opinions are my own and I was not compensated in any which way for providing them.
About the Author 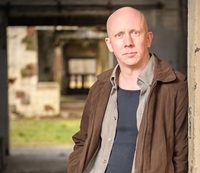 Robert L. Slater is a teacher/writer living in Bellingham, Washington. His stories and poetry have appeared in many small press publications. His first novel, All Is Silence: A Deserted Lands novel, will be released this winter. He has a should’ve-been-a doctorate B.A. in Theatre/Education, Spanish and History minors and a M.A. in Educational Technology. He sings, plays guitar, acts/directs in regional theatres, cooks, reads, practices Taekwon Do, writes plays, songs, and stories. He has six children, ages 9 to 28 years, and one grandchild. His motto is Robert Heinlein’s “Specialization is for Insects.”
All Is Silence Horror Pandemic Post Apocalyptic Review Robert L. Slater