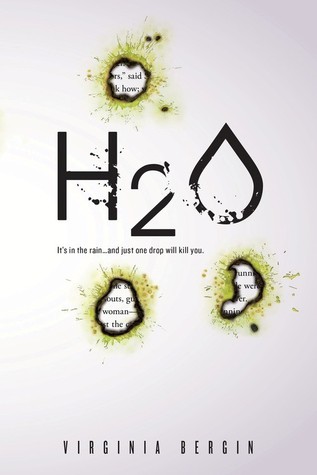 It's in the rain...and just one drop will kill you.

They don't believe it at first. Crowded in Zach's kitchen, Ruby and the rest of the partygoers laugh at Zach's parents' frenzied push to get them all inside as it starts to drizzle. But then the radio comes on with the warning, "It's in the rain! It's fatal, it's contagious, and there's no cure."

Two weeks later, Ruby is alone. Anyone who's been touched by rain or washed their hands with tap water is dead. The only drinkable water is quickly running out. Ruby's only chance for survival is a treacherous hike across the country to find her father-if he's even still alive.

H20 or The Rain (if you're from Britain) is a book that I've been really looking forward to reading for quite some time. We all need water to survive so the concept was equally terrifying and ingenious. Now take that idea of tainted water and add in a pathogen of some sort that eats you from within and replicates in said water and you have yourself a pretty damn interesting story.

One of the things that I really enjoyed about H20 was how realistically portrayed the characters were. Ruby acts exactly as you'd expect a teenager to behave. Yes, she maybe isn't the most likable protagonist but then again a lot of that stems from her probably watching everyone she's cared about die in pretty horrifying ways. I know a lot of people took issue with the character obsessing over her phone and also going on a looting spree but I think that's exactly the response I'd expect from a teenager in that situation. Speaking of the characters, I also really enjoyed her companion Darius. He was so sweet and caring and tried so hard to be a good friend to Ruby even when she was rejecting him at every turn. I really hope he's alright and that we see him again. Lastly I loved the dogs, my heart broke in pieces during one scene and I really, really, (did I mention?) really hope we see one of them again. That scene guys, my heart hurt.

Another thing that I found to be interesting was how the characters dealt with the sudden lack of water. Some stuck with drinking the obvious (soda, bottled water, juices etc...) while others sought out less common sources like Indoor Pools to fill their fluid needs. One of the best things I saw took place when Ruby and her stepfather were looking for water in a grocery store. By happy accident they realized the plants in the floral section sitting in buckets of water were left untouched. I actually had never thought of that as a source myself but now that I've seen it I'll definitely be adding that into my survival knowledge memory bank.

Now although I really enjoyed H20 I did find fault with a few small things.

First off, while I liked the character Princess, being mute did make it hard to connect with her character. I understand she was traumatized and that's why she didn't speak but she could still have a personality despite that. You just have to be a bit more creative with making it known.

Secondly, I wish the ending wasn't so ambiguous. I'm not sure if this is going to be a series either so that definitely adds to the “huh,that's it” factor I experienced.

Lastly, I know it might seem like I'm nitpicking but Ruby's refusal to drink the baby formula bugged me. When you don't know where your next drink is coming from you don't turn your nose up at a source untouched and safe. Plus it is filled with bonus calories so it's an extra win necessity wise.

Final Thoughts
In the end, even though H20 might not have been a perfect read I can't deny that I enjoyed the book despite the stories few issues to the contrary. The Author is if anything a talented writer and the fact she turned a concept like flesh eating rain into something non gimmicky is a credit to that. I definitely will be reading the sequel should one be released and I would certainly recommend reading H20 if you haven't already.


*Copy reviewed provided by Netgalley. All opinions are my own and I was not compensated in any which way for providing them.

Virginia Bergin learned to roller-skate with the children of eminent physicists.
She grew up in Abingdon, Oxfordshire, in a house tied to her father’s job. Her parents, the children of Irish and Polish immigrants – and one Englishwoman – had moved from Liverpool to the south of England in search of work.

Virginia studied psychology but ruined her own career when, dabbling in fine art at Central St Martins, she re-discovered creative writing. Since then she has written poetry, short stories, film and TV scripts and a play that almost got produced – but didn’t.

In between and alongside more jobs than you’ve had hot dinners, she has worked as a writer on TV, eLearning and corporate projects and has 22 broadcast and non-broadcast TV credits, from children’s favourite Big Cat Diary Family Histories (BBC) to the award-winning series Africa (Tigress Productions for National Geographic). Most recently, she has been working in online education, creating interactive courses for The Open University.

She currently lives on a council estate in Bristol and has taken to feeding the birds.