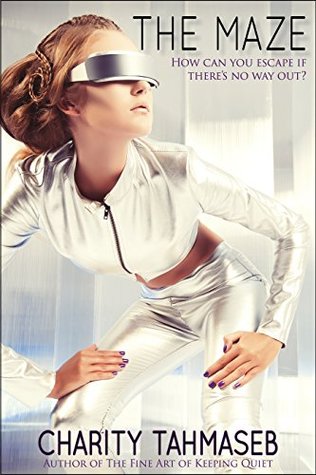 Three stories. Three heroines. Three choices.
The Maze: Cadet Eppie Langtry navigates the cold and endless maze as part of the Academy's final training exercise. Her exploration leads her to a fellow cadet, and their combined curiosity triggers something no one expects--least of all the cadre running the maze.
What Little Remains: In a post-apocalyptic city, Kit ekes out an existence by tending to her rooftop garden. A rift in time brings her a new friend from the past--and something else far more menacing.
Inside Out: When Lexia befriends a girl from outside a luxury spa facility, she starts seeing the cracks in her mother's disastrous fifth marriage, the world in which she lives, and her own future.

About the Author
Charity Tahmaseb has slung corn on the cob for Green Giant and jumped out of airplanes (but not at the same time). She doesn’t think it’s a social stigma to eat alone at a restaurant and read a book. Her favorite city is London, but she loves living in Minnesota.

She spent twelve years as a Girl Scout and six in the Army; that she wore a green uniform for both may not be a coincidence. These days, she writes young adult fiction and works as a technical writer for a software company in St. Paul.
Charity Tahmaseb Dystopian Mini Review Novella Science Fiction The Maze: Three Tales of the Future Young Adult