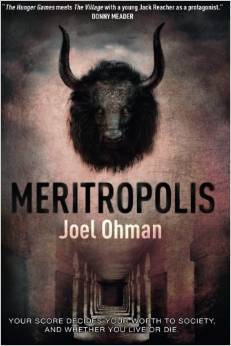 The year is AE3, 3 years after the Event. Within the walls of Meritropolis, 50,000 inhabitants live in fear, ruled by the brutal System that assigns each citizen a merit score that dictates whether they live or die. Those with the highest scores thrive, while those with the lowest are subject to the most unforgiving punishment--to be thrust outside the city gates, thrown to the terrifying hybrid creatures that exist beyond.

But for one High Score, conforming to the System just isn't an option. Seventeen-year-old Charley has a brother to avenge. And nothing--not even a totalitarian military or dangerous science--is going to stop him.

Where humankind has pushed nature and morals to the extreme, Charley is amongst the chosen few tasked with exploring the boundaries, forcing him to look deep into his very being to discern right from wrong. But as he and his friends learn more about the frightening forces that threaten destruction both without and within the gates, Meritropolis reveals complexities they couldn't possibly have bargained for...

Joel Ohman is the author of Meritropolis--"The Hunger Games meets The Village with a young Jack Reacher as a protagonist". He lives in Tampa, FL with his wife Angela and their three kids. His writing companion is Caesar, a slightly overweight Bull Mastiff who loves to eat the tops off of strawberries.
Follow Joel: Website / Goodreads
Dystopian Joel Ohman Meritropolis Review Science Fiction September 2014 Young Adult