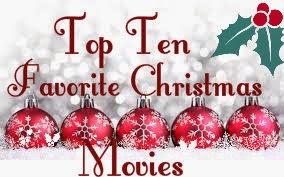 Whether your a fan of the Classics or slapstick Holiday fare, Christmas Movies are an integral part of the Holiday season for many of us. We all have our favorites and this year I figured I'd share some of mine with all of you.

So in no particular order (Save my #1 pick), Here are my Top Ten Favorite Christmas Movies!


"Don't expose him to bright light. Don't ever get him wet.
And don't ever, ever feed him after midnight."


"The thing about trains... it doesn't matter where they're going.
What matters is deciding to get on."

7.) The Nightmare Before Christmas (1993) Touchstone Pictures


"Forgive me, Mr. Claus. I'm afraid I've made a terrible mess of your holiday."

6.) Barbie in the Nutcracker (2001) Mattel Entertainment

"This locket was supposed to take me home but in my heart, I feel like I'm already there."


"My father worked in profanity the way other artists might work in oils or clay.
It was his true medium, a master."

"I think you're all fucked in the head. We're ten hours from the fucking fun park and you want to bail out. Well I'll tell you something. This is no longer a vacation. It's a quest. It's a quest for fun. You're gonna have fun, and I'm gonna have fun... We're all gonna have so much fucking fun we're gonna need plastic surgery to remove our goddamn smiles! You'll be whistling 'Zip-A-Dee Doo-Dah' out of your assholes! I must be crazy! I'm on a pilgrimage to see a moose. Praise Marty Moose! Holy Shit!"


"Don't dilly-dally there, pretty lady.
We're all gonna be down here talking about you."

And Finally my favorite Christmas movie of all time is.....

"It was the afternoon of Christmas Eve and Scrooge was conscious of a thousand odors, each one connected with a thousand thoughts and hopes and joys and cares long, long forgotten."