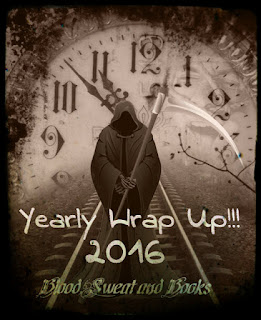 2017 is nearly  upon us and that means that it's time to reveal my Top Ten Favorite Books read this year. 2016 was a rough year for books (in this readers opinion). While I met/ slightly exceeded my reading goal I feel a bit bad about not reading all the stories I originally set out to at the end of last year.  Although if I'm being entirely honest, I feel many Authors were in a rut as well. I can't tell you how many stories just felt like regurgitated plots of books past. I DNR'd more than a dozen because I just wasn't being engaged by the characters or plot and that's pretty terrible considering the amount of books I actually picked up this year. Thankfully 2017 looks to be a return of originality and I for one cannot wait to see what it brings.

Anywho back to the post at hand. As I mentioned earlier, I did meet and slightly exceed my reading goal this year and the stories I read were for the most part incredibly good. Unlike past Wrap Up years, 2016  had clear winners and losers and it didn't take me all that long to decide which stories should land on this list. So without further ado, here are my Top Ten Favorite Books of 2016! After the destruction of the Hellmouth, the Slayers--newly legion--have gotten organized, but it's not long before new and old enemies begin popping up. Buffy, Xander, Willow, and a very different Dawn are introduced to the season's big bad, Twilight, and are only beginning to understand the incredible reach of this mysterious threat. Meanwhile, rebel Slayer Faith teams up with Giles to handle a menace on the other side of the Atlantic. It's a dirty job, and Faith is just the girl to do it!

Of course they thought he was crazy . . . . But Seymour Willis insisted his house was breathing and that he heard someone's - or something's - heartbeat pounding within the walls. So the disbelievers investigated, doubting the existence of ghosts or demons - until their reason was shattered by the shrieking unseen creature who threatened to claim their lives. By then it was too late to stop the fiendish force from wreaking vengeance upon those denying its very existence. One by one, they must die - in exchange for its eternally evil soul. This isn't a romance...there aren't any happily-ever-afters, this is just Romeo's fight for survival and how he became a NOLA Survivor. STAY OUT OF THE BERMUDA TRIANGLE

Few places on earth engender as much primal fear as the mysterious and forbidding Bermuda Triangle. With good reason.

A bizarre plane crash at sea leaves Bria Hunter and her high school classmates trapped in a chilling race for survival.

Will Bria and her friends escape from the evil presence before it’s too late?

Breezy remembers leaving the party: the warm, wet grass under her feet, her cheek still stinging from a slap to her face. But when she wakes up, scared and pulling dirt from her mouth, a year has passed and she can’t explain how.

Nor can she explain the man lying at her grave, dead from her touch, or why her heartbeat comes and goes. She doesn’t remember who killed her or why. All she knows is that she’s somehow conscious—and not only that, she’s able to sense who around her is hiding a murderous past.

Haunted by happy memories from her life, Breezy sets out to find answers in the gritty, threatening world to which she now belongs—where killers hide in plain sight, and a sinister cult is hunting for strange creatures like her. What she discovers is at once empowering, redemptive, and dangerous.

Now Skye is a nobody, a virtual sixteen-year-old girl without any glamorous effects or expensive downloads to make her stand out in the App World. Yet none of that matters to Skye. All she wants is a chance to unplug and see her mother and sister again.

But when the borders between worlds suddenly close, Skye loses that chance. Desperate to reach her family, Skye risks everything to get back to the physical world. Once she arrives, however, she discovers a much larger, darker reality than the one she remembers. "Y" is none other than unemployed escape artist Yorick Brown (his father was a Shakespeare buff), and he's seemingly the only male human left alive after a mysterious plague kills all Y-chromosome carriers on earth. But why are he and his faithful companion, the often testy male monkey Ampersand, still alive? He sets out to find the answer (and his girlfriend), while running from angry female Republicans (now running the government), Amazon wannabes that include his own sister (seemingly brainwashed), and other threats.

Note: I truly wish I had reviewed this series as I read it. Y: The Last Man was hands down one of the best stories I have ever read not just in a graphic novel form but in general. I cannot recommend reading this enough and the only reason it isn't my #1 pick of 2016 is because the book in that spot was extremely hard to beat.

Well there ya have it my Top Ten Favorite Books Of 2016!
Did any of yours make the list?
If so, Which ones?
Leave me comment below telling me which made your list or if you have a link feel free to share it!

Top Ten Favorite Books I Regret Not Reading in 2016