Woo boy it's been awhile since I've done one of these. I do apologize about that.

Lately I've been trying hard to find some lesser known Zombie films to watch. I've run the gambit (so to speak) through the years and popular  releases aside it's becoming a bit hard to find ones that I actually haven't seen. However, being the huge fan of the genre that I am a little extra effort to find some quality Zombie films to watch is half the fun of being a fan of Zombies in the first place.

*All movie titles linked to IMdB for your convenience.

First up I want to share a film called Contracted: Phase II. This film is a sequel to a film called Contracted which is in short about a girl who gets infected with a Zombie virus through an unprotected sexual encounter. Phase II expands more upon the world and the man responsible for spreading the infection. The acting in this film was great and the main character Riley is sympathetic to say the least. Also all joking aside, in a weird way this film is a great PSA about the dangers of unprotected sex. I did take comfort in the fact that although the guy had unprotected sex he was smart enough to get himself tested when he realized the gravity of the situation.  I also really enjoyed the ending of this one and if you stay through the credits you will be treated to a bonus scene which certainly makes me believe a Phase III could be potentially in the works. Overall, I really enjoyed this film and highly recommend watching both it and Contracted when you get the chance. 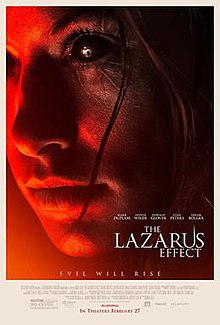 The next film I want to share is called The Lazarus Effect. This film follows a group of medical students who succeed in bringing the dead back to life. Unfortunately in the process one of the doctors dies and when she's brought back to life things don't turn out quite as planned. The tale of drug experimentation gone wrong was solidly written and acted. Olivia Wilde in the role of Dr. Evans is certainly a highlight. Who would of thought Olivia Wilde would be so good at portraying someone so bad. Now for all you purists The Lazarus Effect isn't a typical zombie tale but if you enjoyed films like Pet Semetery and Flatliners you'll definitely dig this one.

Lastly, I watched a little German film called Blood Glacier. The story follows a group of scientists working in the Austrian Alps. On one of their expeditions they discover that one of the glaciers is leaking a strange red fluid and all those who come into direct contact with it are changed in very unpleasant ways. Overall I enjoyed this one. It might not have had the best acting or direction but the effects were cool and the cinematography was decent. Like the others listed above this story was a bit unconventional and one could technically claim this was an alien parasite not a Zombie virus but whatever. If Rec and 28 Days Later can be listed in the genre, so can this. The one real downside I had with this film was the ending. I could of done without the Abortion guilt backstory, it just felt like a bit of propaganda thrown in because it could not because the story needed it. Would I still recommend the film? Sure, however, I just think the ending could of been done a bit better.

I rated this film 3 stars on Netflix.