Hey ya'll, this week I wanted to share my latest gaming obsession 7 Days To Die. Holy moly this game is intense. I've only had the game a week (Xbox One) but it's quickly grown on me and become a favorite in the household to play. Now if you haven't heard of this game yet here is some background info: 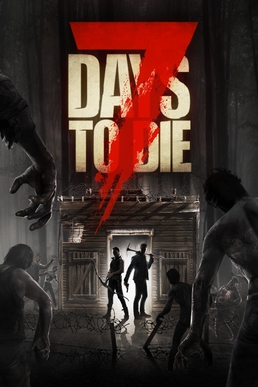 7 Days to Die is an open world survival video game. The game was released June 28, 2016 by Telltale Publishing. If that name sounds familiar that's because they also produce The Walking Dead video games as well.

The games plot is fairy simple. World War 3 has happened, you the survivor must find shelter, food and water, as well as scavenging supplies to fend off the numerous zombies (hinted to be the consequence of nuclear fallout) that populate the area. In this instance that area is Navezgane, Arizona.

As of this posting, the game developers are still working on a more complicated plot beyond just the survival aspect to the story so if you're looking for an in depth story line this game might not be for you.

What I like about this game:
OK, I admit, I was really skeptical about this one at first. A friend of mine whose pretty much as equally Zombie obsessed as I am said that the game was nothing more than Minecraft for Adults. Now, he's right, it is. However, where this game excels is that every 7 days you're faced with a Horde of Zombies who attack you wave after wave, relentlessly all night long. Depending on your settings that means 10 minutes or more of intense Zombie action. Your goal is to be spend the time before the wave hits fortifying defenses, scavenging supplies and making sure you can outlast the Zombie swarm that defends.

What I don't like about this game:
Minimal character customization, game lag (pretty sure this is a porting issue that will probably be fixed eventually), lack of overall storyline and the Zombie models could use more variety. Yeah the 6 or 7 types are cool but if the whole world has gone to hell in a handbasket their should be more diversity among the dead.

Overall, for 30 bucks I'm happy with this game so far. I'd definitely suggest checking out if you haven't already. Let me know what you think if you do. I'd love to hear your thoughts and opinions.


Well that about wraps up this weeks Zurvival Saturday. Like what you see? Please share! I thank you if you do.  Want to check out past Zuvival Saturday's? Click Here