First Let's Discuss the Book.
Here is a bit of back story in case some of you aren't familiar with the novel. Breaking Dawn is a novel written by Author Stephenie Meyer. The book was originally published August 2, 2008 by Little, Brown and Company. Breaking Dawn is the Final Novel in the Twilight Saga and follows Bella as she grows up and faces the consequences for all of her actions thus far. During its first 24 hours released Breaking Dawn sold over 1.3 million copies in the U.S. and over 100k copies in Canada and 20k in the U.K. respectively. Breaking Dawn received very mixed reviews from Critics upon release but that didn't deter fans as Breaking Dawn went on to become the best selling Children's book of 2008 with over 6 million copies sold.

Edward Cullen- Bella's Husband and Father to their Half Vampire/Human child Renesmee. Edward is deeply protective of his Family and is deeply troubled by word the Volturi will be arriving to deal with the child created from their union .

Jacob Black- Bella's best friend and also a Quileute Native American and werewolf. Out of love for Bella and Renesmee he agrees to do whatever it takes to keep them safe. 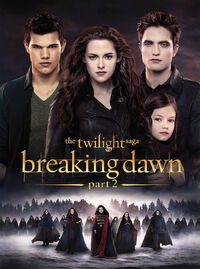 Now Let's Discuss the Movie.
In case some of you aren't familiar with the film, here is a bit of back story. Breaking Dawn was directed by Billy Condon and was released November 16, 2012 by Summit Entertainment. Breaking Dawn cost $120 million to create and went on to make over $829 million worldwide. Breaking Dawn released to mostly mixed reviews with the consensus stating: "It is the most enjoyable chapter in The Twilight Saga, but that's not enough to make Breaking Dawn Part 2 worth watching for filmgoers who don't already count themselves among the franchise converts." It should be noted however that despite the mixed reactions Breaking Dawn pt. 2 went on to become the highest grossing film of the series.

Well that about wraps up this weeks From Page To Screen. I am sure I missed a few differences but considering the split that's bound to happen anyway. Which however do I prefer? Considering I think Breaking Dawn was the weakest book in the series, this week, the movie takes it hands down. As with the first part what they did with the story was impressive. I also think Kristen Stewart's acting was probably the best of the series as well. Maybe it's because the contacts helped her look less strung out, who knows. Definitely read the book if you haven't already even if just to see how the story should of went had it been told as one cohesive piece but if you'd rather just skip ahead to the film I won't blame you.

Have you read the book or watched the film?
Which did you like better? Why?
What is your favorite quote or scene from Breaking Dawn?

Leave your answers in the comments below, I love to read your responses. Like what you see? Please share!
Book To Movie Differences Breaking Dawn From Page To Screen Part 2 Stephenie Meyer Twilight Vampires