Showing posts from November, 2015
Show all

Waiting On Wednesday is a weekly blog post hosted by  Breaking The Spine  where readers showcase which books they are highly anticipating. This week I'm turning my spotlight on Firstlife by Gena Showalter. Expected Publication:  February 23, 2016 from Harlequin Teen ONE CHOICE. TWO REALMS. NO SECOND CHANCE. Tenley “Ten” Lockwood is an average seventeen-year-old girl…who has spent the past thirteen months locked inside the Prynne Asylum. The reason? Not her obsession with numbers, but her refusal to let her parents choose where she’ll live—after she dies. There is an eternal truth most of the world has come to accept: Firstlife is merely a dress rehearsal, and real life begins after death. In the Everlife, two realms are in power: Troika and Myriad, longtime enemies and deadly rivals. Both will do anything to recruit Ten, including sending their top Laborers to lure her to their side. Soon, Ten finds herself on the run, caught in a wild tug-of-war between
Post a Comment
Read more

Waiting On Wednesday is a weekly blog post hosted by  Breaking The Spine  where readers showcase which books they are highly anticipating. This week I'm turning my spotlight on The Fireman by Joe Hill. Expected Publication: May 2016 by William Morrow No one knows exactly when it began or where it originated. A terrifying new plague is spreading like wildfire across the country, striking cities one by one: Boston, Detroit, Seattle. The doctors call it Draco Incendia Trychophyton. To everyone else it’s Dragonscale, a highly contagious, deadly spore that marks its hosts with beautiful black and gold marks across their bodies—before causing them to burst into flames. Millions are infected; blazes erupt everywhere. There is no antidote. No one is safe.  Harper Grayson, a compassionate, dedicated nurse as pragmatic as Mary Poppins, treated hundreds of infected patients before her hospital burned to the ground. Now she’s discovered the telltale gold-flecked marks on her ski
Post a Comment
Read more

Promo Post: When We Were Human by Kate L. Mary 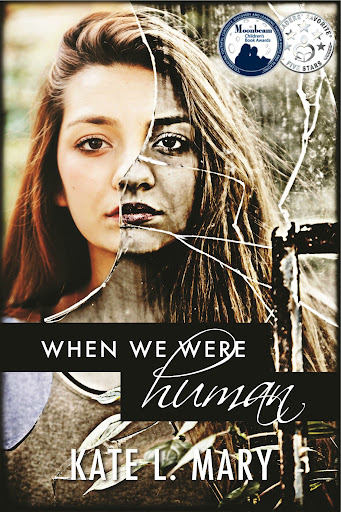 When We Were Human 2015 Moonbeam Children's Book Awards Silver Medalist for Young Adult Fantasy/Sci-Fi Fiction Get it for $0.99 November 12-18 only Buy on Amazon “They came four years ago. Invaded our planet, rounded us up, decimated the human race. We fought back, and some even say we won, but they’re wrong. The invaders took everything from us. Our family. Our hope. Our humanity. We won the war, but there are no humans left. Only monsters who will do anything to survive. Some look human and some don’t, but they are all the same.” ╣Synopsis╠ Eighteen-year-old Eva has spent the last year punishing herself for her sister’s death and hiding from everyone she comes into contact with, human or otherwise. With the population destroyed and the Earth left in ruins, she sees little hope left for the future. But when she crosses paths with Walker and Tara something inside her awakens. Something she thought had died along with her entire family. In these new
Post a Comment
Read more

Numbers Ignite Rebecca Rode (Numbers Game, #2) Publication date: January 26th 2016 Genres: Dystopia, Young Adult Treena and Vance think they’ve pulled out of the numbers game forever. They’re wrong. After Treena’s disastrous attempt to unite the nation, she has the deaths of hundreds haunting her dreams. Now, with hatred and accusations following her past the border, she’s determined to leave that horrible day behind and find a peaceful, uneventful life with Vance and the settlers. But when she starts seeing mysterious figures hiding in the abandoned cities at night and uncovers a strange desert population, she realizes there’s a danger much greater than NORA to worry about—and she just abandoned her people to their fate. Vance is a prisoner. Being rejected by the girl he loves and put on trial for betraying his clan are bad enough, but now he’s been framed for a crime he never committed. Their less-than-perfect refuge has become the political game of a madman, and Vance is t
Post a Comment
Read more
More posts