Showing posts from February, 2017
Show all

Hey ya'll, I'm back this week with a Movie Review for the Japanese film, Zedd.  I came across this film because it stars the group Cross Gene #크로스진 and frankly my curiosity was piqued even further when I saw they had created and starred in a Zombie film. Genre: Thriller, Horror, Zombies Director: Teppei Nakamura Country: Japan Run Time: 54 Minutes 6 youngsters have to survive in the world populated with zombies. They attempt to fill their time with music, play and dancing... But, one day, one of them is contaminated so they have no choice  but to find an antidote. *Small Spoilers Below As some of you may know I am a huge Kpop fan. Recently I've been branching out from the big 3 groups (those coming from SM,YG and JYP) and trying to find smaller but still amazingly talented groups to follow as well. Enter: Cross Gene #크로스진. I found them by chance through my subscriptions on Youtube as they had just premiered a video called Black or Wh
6 comments
Read more

Title: The Haunting of Tinley Hall Author: Tania Hagan Genre: Paranormal Romance Publisher: CHBB Publishing Cover Designer: Aurelia Fray, Pretty AF Designs Editor: CLS Editing Services Hosted by:  Lady Amber's PR Blurb: Seventeen-year-old Tinley Hall takes a fall down the steep staircase in her family's restored Victorian home. When she becomes aware of her surroundings, she realizes she might be dead and she's not alone as her spirit haunts the old mansion that once was her home. After meeting a handsome stranger, Tinley is forced to question if he's really a ghost and if she's really dead, but she knows something more complicated must be happening. Will Tinley be able to pull herself through death's door, back into the land of the living? Or, will she even want to? As feelings for her companion grow into an otherworldly love affair, Tinley must decide if she's actually found her soulmate or if she just imagined the whole th
3 comments
Read more

Waiting On Wednesday is a weekly blog post hosted by Breaking The Spine where readers share which books they are highly anticipating. This week I want to share Ararat by Christopher Golden Why I'm Waiting :  First off, I love the premise of this story, it sounds really unique. Actually this story reminds me of the Mummy meets say Dracula 2000. I'm not saying the creature inside is a Vampire but it is at least plausible since it was found in a coffin. Either way I think the premise has loads of potential and I know Christopher Golden is an Author who can do Horror well so I'm optimistic.  Expected Publication:  April 18th 2017 from St. Martin's Press New York Times bestselling author Christopher Golden’s supernatural thriller about a mountain adventure that quickly turns into a horrific nightmare of biblical proportions. Fans of Dan Simmons’ The Terror will love Ararat, the thrilling tale of an adventure that goes awry. When a newly engaged couple climbs M
1 comment
Read more 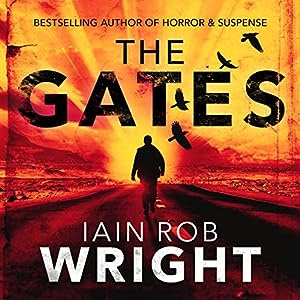 What will you do when the world ends? That's a question that needs answering quickly when the gates to Hell open up all over Earth. Taking place across the globe is an apocalypse like no other, and humanity will find itself at war against a smart and merciless foe. Follow the struggles to survive with several characters as things go from bad to worse. Humanity is dwindling. Guy Granger is a Coast Guard captain in search of his kids. Mina Magar is a photojournalist taking pictures of horror she could never have imagined. Rick Bastion is a fading pop star with his head in a bottle and no hope for his future. Tony Cross is a soldier stuck on the Iraq-Syria border, but fighting insurgents is no longer a priority as a new threat emerges. Follow them all as they fight to stay alive. When the gates open, all Hell will break loose! *Small Spoilers Below Review Iain Rob Wright is an Author whom I've followed for quite a few years now. The Gates is
1 comment
Read more
More posts