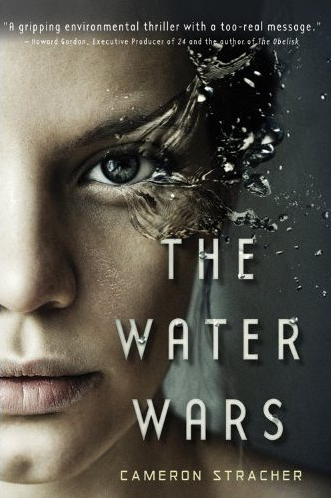 Would you risk everything for someone you just met?
What if he had a secret worth killing for?
Welcome to a future where water is more precious than oil or gold...

Hundreds of millions of people have already died, and millions more will soon fall-victims of disease, hunger, and dehydration. It is a time of drought and war. The rivers have dried up, the polar caps have melted, and drinkable water is now in the hands of the powerful few. There are fines for wasting it and prison sentences for exceeding the quotas.

But Kai didn't seem to care about any of this. He stood in the open road drinking water from a plastic cup, then spilled the remaining drops into the dirt. He didn't go to school, and he traveled with armed guards. Kai claimed he knew a secret-something the government is keeping from us...

And then he was gone. Vanished in the middle of the night. Was he kidnapped? Did he flee? Is he alive or dead? There are no clues, only questions. And no one can guess the lengths to which they will go to keep him silent. We have to find him-and the truth-before it is too late for all of us.

I picked up this book a few months back based on the cover. I was immediately intrigued by it and once I read the description I knew it was a book that I'd want to read. The Author Cameron Stracher has created a plausible and at a time frightening glimpse of what might happen in a world with limited water.

The story opens with 15 year Old Vera who lives in one of the six Republics what used to be the former United States Midwest. The Lack of Fresh water dominates her life and those all around her. Everything from what they drink to what they wear is dictated by the corporations based on how little water it is used to produce. The landscape is painted in a way that it is rather clear that rain has stopped falling. How this happened is briefly mentioned in the book but never fully explained.

On a seemingly normal morning on the way to school Vera meets a boy named Kai. Kai doesn't go to school instead he mentions that he helps his father a Driller search for water. Kai is also in fear for his life because of this. Water in this world is precious and those who control it have power and riches and those who don't want that power for themselves. Vera and Kai begin a budding friendship with a light hint of budding romance beneath the surface. We also meet Will Veras older brother. He is quite sure the desalinated Government rationed water is what is making everyone including their own mother sick and he doesn't believe the Government when they said no more fresh, clean supplies exists.

When Kai doesn't show up to meet Will and Vera one day the pair become suspicious. They sneak into his apartment past the guards and notice the place has been torn apart, a dead guard on the floor and no sign of Kai anywhere. Before they are caught they sneak away and that is where the adventure begins. From this point on it's a roller coaster ride of non stop action in the search for Kai.

The Action in this book was good. The pacing throughout pulled the story along nicely without to many slow parts. At times the book does get a bit preachy with how people waste water. I think the message is good though. The only real downside to the book was the end. Yes they succeeded in their goal but it also ended abruptly without any real satisfying conclusion. Overall am I happy I bought the book yes. Would I read it again though probably not. So I am giving this book a rating of 3 ★★★
Cameron Stracher Dystopians Netgalley Review The Water War Young Adult