For this weeks Book to Movie Monday I have decided to cover the movie Ella Enchanted.


First Lets Discuss The Book. Below Is The Cover. 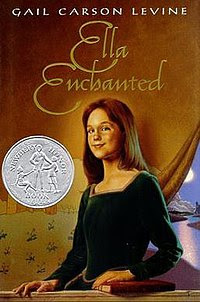 Now for a little back story in case some of you aren't familiar with the novel. Ella Enchanted is a book written by the Author Gail Carson Levine. It was published back in 1997 by Harper Trophy. The story is a re-imagining of Cinderella featuring various mythical creatures including fairies, elves, ogres, gnomes, and giants. Much of the book was written on commuter trains which the Author spent nearly 4 hours on daily commuting back and forth to work each day.

Ella of Frell- Ella is a brave, outspoken, strong will girl living her stepmother and stepsisters who make her life a living hell. Unfortunately for Ella as a baby a reckless Fairy Godmother named Lucinda "gifted" her with the power of obedience. Not only does poor Ella have to do everything she is told. She also has to do it even if it puts her in harms way. Unwilling to accept her fate Ella sets off on a mission to find Lucinda and break the curse that binds her.

Prince Charmont- Heir to the throne of Kyrria left by his dead father, Prince Charmont is more than just a pretty face with dreams of marrying the perfect princess who will look good by his side. He is brave, cunning and above all loyal to his people. When he meets Ella he is charmed by her personality more than her beautiful looks.

Mandy- Fiercely protective of Ella she is loyal to her alone. It is later revealed that she is Ella's Fairy Godmother but try as she might she cannot undo another Fairy's spell. When Ella is made to be a servant, Mandy takes Ella under her wing keeping her safe as best she can. She also is the one who sets Ella on the quest to break Lucindas gift.


Main Antagonists
Hattie,Olive,&Dame Olga- Ella's Stepmother and Stepsisters make Ella's life miserable at every opportunity. Dame Olga marries Ella's father after her mother dies and due to Lucinda the fairies gift of love is bound to him. Since she cannot leave her husband Olga takes out all her frustrations on Ella. Even making her a servant in her own house when Ella's father goes away on business. Hattie and Olive are both spoiled stepsisters with their eye on the prince. After Hattie finds out Ella's secret she cruelly uses this against her even when it puts her life in danger. 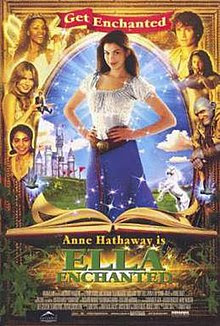 Major differences between the book and movie

In the Book Charmoth has no Evil Uncle. In fact his father is alive.
vs.
In the Movie Charmoths Uncle is scheming to take the throne from Charmoth and previously killed Charmoth's father.

In the Book Ella's journey is only part of the story.
vs.
In the Movie it pretty much is the main focus.

In the Book Shannen The Elf is more a background character.
vs.
In the Movie he is Ella's sidekick.

In the Book Mandy the cook plays a huge role in Ella's life and adventures.
vs.
In the Movie she is reduced to a background character.

In the Book the Fairy tale creatures each have their own happy communities.
vs.
In the Movie they are under the rule of Charmoth's Uncle and pretty miserable.

In the Book the characters have no elevators or Prince Char fan clubs.
vs.
In the Movie they blended elements of new and old.

I know there are more changes (I know the book she carries is different just don't remember how) but I felt these were the most drastic from the book. Please feel free to add others I missed in the comments.

In the end the Book is far superior to the movie. Why they changed it so much is beyond me. Do I suggest watching the movie? Yes, it is a cute fun flick and Anne Hathaway works fine as Ella. I particularly think the actress who plays Halie was a perfect cast. Watch it just for her even.