For this weeks Book To Movie Monday I have decided to cover the movie A Walk To Remember by Nicholas Sparks. 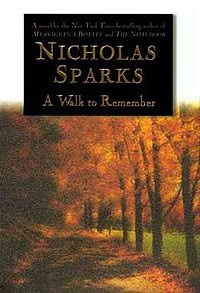 Now for a little back story in case some of you aren't familiar with the novel. The Queen Of The Damned is written by Author Nicholas Sparks and was released October,1999 by Warner Books. The Novel was inspired by the Author's sister although the story was largely fictional. After the success of Nicholas Sparks Book to Movie conversion for Message in a Bottle, the film rights for A Walk To Remember were sold to Warner Bros. in 1998. In case you don't realize that is almost a year before the book even hit shelves!

Jamie Sullivan- Daughter to the local minister. Jamie is a sweet and kind but socially awkward girl. She is diagnosed with Leukemia and decides to live her life with the help of the popular Landon Carter.

Landon Carter- Handsome and Rich Landon is the complete opposite of Jamie but eventually falls in love with her. He is also the narrator of the book.

Hegbert Sullivan- Father to Jamie. He is old and set in his ways. He also takes a strong dislike to Landon. 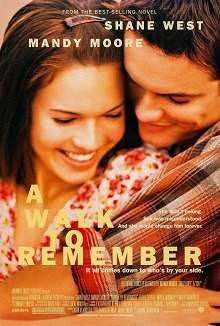 In the Book Jamie has strawberry blond hair.
vs.
In the Movie she is a brunette.

In the Book Jamie takes part in a play and is cast as an Angel.
vs.
In the Movie Jamie is a sultry bar singer.

In the Book Jamie gives Landon a bible as a gift.
vs.
In the Movie Jamie hands him a book of poetry and even jokes that it's not a bible.

In the Book Landon takes drama to get an easy A.
vs.
In the Movie Landon does the play as community service.

In the Book Landon's father isn't around much because he's a US Senator.
vs.
In the Movie Landon's mother and father are divorced.

In the Book Landon never builds Jamie isn't interested in science.
vs.
In the Movie Landon builds Jamie a telescope.

In the Book the ending is left open.
vs.
In the Movie Jamie without a doubt dies from leukemia.

In the Book Jamie is asked to a dance by Landon.
vs.
In the Movie this scene is left out entirely.

While I love the flow of the book the winner of this Book To Movie Showdown is the movie. I loved,loved Mandy Moore as Jamie Sullivan she was perfectly cast I think. I was sad that they did alter the story a bit since I really feel it still could of been good set in the 50's. Overall great movie, great book I recommend both if you haven't read or watched either already.