For this weeks Book To Movie Monday I have decided to cover Twilight: New Moon. 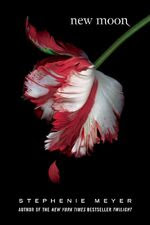 Now for a little back story in case some of you aren't familiar with the Novel. Twilight: New Moon is a novel written by Author Stephenie Meyer. It is the second novel in the Twilight Series. New Moon was published September 6, 2006 by Little, Brown and had an initial print run of 100,000 copies. New Moon has been translated into over 38 languages and has over 100 million copies sold worldwide.

Bella Swan- A teenage girl who lives in Forks. She is deeply in love with Edward Cullen who just happens to be a vampire. After Edward leaves her she falls into a deep depression and while not suicidal it is certainly a dark period in her life. Her best friend Jacob becomes her only source of comfort during this time.

Edward Cullen- Bella's boyfriend. Edward a vampire is part of the Olympic Coven and only drinks the blood of animals though its implied he is very tempted by Bella's blood. In New Moon after an incident with his brother Jasper he decides to leave the area rather than risk him or his family harming her.

Jacob Black- Bella's best friend and also a Quileute Native American and werewolf. Jacob is secretly in love with Bella and is pained that she doesn't return his affections. After Edward leaves Bella he tries to comfort her as best he can. 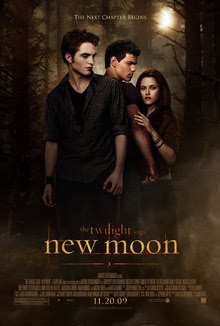 In the Book Aro never asks Felix to take care of Bella.
vs.
In the Movie Aro does ask which prompts Edward to step in and try to save her.


In the Book Jacob mentions missing Bella's birthday and has not seen her since the Prom.
vs.
In the Movie Jacob shows up outside Bella's High School to give her a present.

In the Book Bella acting recklessly approaches a group of men but is warned off by Edward's voice in her head.
vs.
In the Movie Bella approaches the men and even gets on the bike with one but eventually realizes the danger she is in and yells at him to stop.

In the Book Jacob attacks Paul after he starts talking bad about Bella.
vs.
In the Movie Bella slaps Paul, angry he turns into a werewolf forcing Jacob to act and turn into one in front of Bella to protect her from Paul's wrath.

In the Book only Alice meets Bella and Edward in the school hallway to wish her a Happy Birthday since Jasper is at college with Rosalie and Emmet.
vs.
In the Movie Jasper and Alice meet up with Bella and Edward. Jasper uses his "influence" to make her agree to a party later.

In the Book Bella doesn't meet the pack until she goes to Emily's house.
vs.
In the Movie Bella confronts the Pack demanding to know why Jacob has been absent.

In the Book Bella has a job at a hardware store in town.
vs.
In the Movie Bella has no job.

In the Book Bella gets the papercut from opening Edward and Alice's gift.
vs.
In the Movie Bella is opening the gift from Esmee and Carlisle.

In the Book after Bella is hurt Carlisle asks if she'd like treated at the hospital or his home office.
vs.
In the Movie Carlisle immediately begins treatment at the house.

In the Book after Mike gets sick at the movies Jacob takes him home.
vs.
In the Movie Jacob snaps at Mike and he leaves on his own.

In the Book it is revealed that Carlisle took Edward to his home before transforming him.
vs.
In the Movie Carlisle transforms Edward at the clinic when nobody is watching.

In the Book Bella tells the Pack about the Cullens powers.
vs.
In the Movie this isn't mentioned but Jacob seems to know anyway when he demands Edward get out of his head.

This is only a handful of the differences but some of the more important ones. If you would like to read more I found a nifty sight on the web that catalogs them. You can read about them Here.

Overall I think that the book is better because it really goes into detail about the events concerning Edward's departure and I think it gives great insight into Bella's psyche during that time. Definitely check out both if you haven't already. Let me know which you like better and why in the comments down below. I love reading your responses.