From Page To Screen (31) Casino Royale

For this weeks From Page To Screen, I have decided to cover Ian Fleming's Casino Royale. 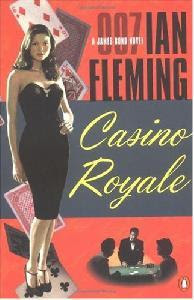 Now for a little back story in case some of you aren't familiar with the Novel. Casino Royale is a novel written by Author Ian Fleming. The book was originally published April 15,1953 by Jonathan Cape. Ian Fleming initially began writing Casino Royale as a way to distract himself from his upcoming nuptials to girlfriend Ann Charteris. Casino Royale was largely inspired by events that happened in Ian Fleming's own life during the time he spent working at the Naval Intelligence Division of the Admiralty.

James Bond- A British Intelligence secret agent. James Bond is a 00 agent meaning he has killed two people. James Bond is a bachelor and is noted for enjoying the finer things in life—expensive clothes, champagne, fine food and cars most notably his Bentley convertible coupe with a supercharged engine.

Le Chiffre- Le Chiffre is banker to the world's terrorist organizations. A mathematical genius and chess prodigy, his abilities have helped him earn large sums of cash through Gambling. Thwarted by Bond Le Chifre losese a large portion of his money totaling totaling $101,206,000. To recoup his loss he sets up a high stakes game of Texas Hold em at the Casino Royale in Montenegro.


The above mentioned are the most significant changes I felt between the book and film. I guess the question that remains is, Which do I prefer? This one is easy, hands down The Film. You have to understand the books are set in a very different time period. Women were seen more or less as domestic divas and Bond treats them as such. Good for shagging, good for arm candy, not suited for the workplace and certainly not as knowledgeable as a male in acts of espionage. That being said you should definitely still read the book at least once if you haven't already. It offers greater insight into Bonds development into the 007 agent we know and love today and you get to see more of the behind the scenes espionage stuff which is pretty cool.