For this weeks From Page To Screen, I have decided to cover Die Hard aka Nothing Lasts Forever by Roderick Thorp.

I have to give credit to Netgalley for inspiring this one. :)


First, let's discuss the book. Below is the cover. 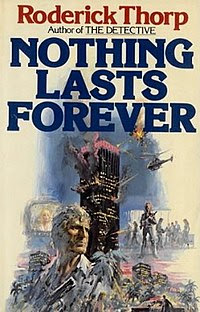 Now for a little back story in case some of you aren't familiar with the Novel. Nothing Lasts Forever is a novel written by Author Roderick Thorp. The book was originally published in 1979 by W.W. Norton & Company. Nothing Lasts Forever originally was intended as a sequel to Roderick Thorp's other work The Detective but in 1988 it was reworked into a standalone novel instead. Fun Fact: The title character Joseph Leland was originally intended to be played by Frank Sinatra, who knew!!

Joseph Leland- A retired NYPD detective. Joseph is traveling to LA to visit his daughter for Christmas. Joseph is paranoid of Terrorists and is never seen without his beloved Browning Hi-Power pistol. Joseph is mentioned as being a pilot during WW2 and also for carrying a great burden from the war which is never actually spoken about but is hinted at.

Stephanie Gennaro- Daughter to Joseph Leland. To mend their strained relationship she invites her father to her works Christmas party in LA. When the building is overrun by Terrorists, Stephanie must believe her father can achieve the impossible and save them all.

Anton "Little Tony The Red" Gruber- Leader of the terrorists who take over Klaxon Oil. He is of Germany heritage but speaks English fluently. Gruber is his real name but most people including Joseph Leland call him by his nickname Little Tony.

In case some of you aren't familiar with the Movie here is a bit of back story. Die Hard was directed by Josh McTiernan and was released July 15, 1988 by 20th Century Fox. Die Hard cost $28 million to make and grossed over $140 million worldwide in its initial run. The Film is considered one of the best Action Movies ever made and remains a fan favorite to this day.

The Above mentioned are probably the most significant changes between the book and film. Which version do I prefer? The Film hands down. Bruce Willis kicks so much ass in this film its unbelievable plus hello Allan Rickman is in it that alone makes it better!! If your curious I suggest reading the book but honestly I really don't think you need to in order to watch the film. This is one of those rare occasions where I can say the Film is better than the book. Now that doesn't mean the book is awful, it isn't however, the action just translates so much better on screen. The book also ends on a very down note. I prefer the much more upbeat promising ending of the film.


Want to see for yourself? Check out the Trailer below!