From Page To Screen (33) My Sister's Keeper

For this weeks From Page To Screen, I have decided to cover My Sister's Keeper by Jodi Picoult.
First, let's discuss the book. Below is the cover. 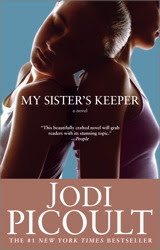 Now for a little back story in case some of you aren't familiar with the novel.  My Sister's Keeper is a novel written by Author Jodi Picoult. My Sister's Keeper was originally published April 6,2004 by Atria books.  My Sister's Keeper tells the story of 13 year old Anna who was born solely to help her dying sister Kate survive. When the burden of being her sisters savior becomes to much Anna litigates against her parents for medical emancipation. Since initial publication, My Sister's Keeper has become one of the most challenged books in the US due to its views on Sexism, Homosexuality and Religion not to mention the use of profanity, drugs and violence.
Let's look at some of the characters now shall we.
Main Protagonists
Anna Fitzgerald-  Youngest child of the Fitzgerald family. Anna was born with the intention that she could help save her older sibling Kate who is dying from cancer. Anna grapples with being Kate's savior and the emotional as well as physical toll it takes on her.
Sara Fitzgerald- Matriarch of the Fitzgerald family her life revolves around keeping her daughter Kate alive neglecting the rest of the family in the process. She has admitted that when Anna was born she only thought of her as Kate's savior implying that she wouldn't of had her if not for needing to keep Kate alive.
Campbell Alexander- Campbell has the most personal growth of all the characters. Due to personal struggles Campbell is originally rude and arrogant but through his interactions with Anna he becomes a man of compassion finally letting people into his life. 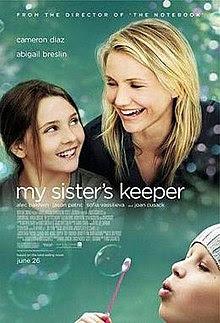 In case some of you aren't familiar with the Movie here is a bit of back story. My Sister's Keeper was directed by Nick Cassavetes and was released June 26,2009 by New Line Cinema. My Sister's Keeper originally had Elle and Dakota fanning playing the Fitzgerald sisters but when Dakota heard she'd need to shave her head for the role she dropped out with Elle soon after following.
Major Differences Between The Book and Film
*SPOILERS mentioned

The Above mentioned are probably the most significant changes between the book and film with the exception of the ending. For whatever reason the director of the film changed the ending to have Kate die but in the book this doesn't happen. That car accident I mentioned above, yup Anna dies and then Campbell acting as her guardian gives Kate the kidney in order to survive (which she goes into remission after) and the rest of Anna's organs are presumed to be donated as well. Personally I hated the books ending so this was fine by me but I know it t'd a lot of fans of the book off. I guess the question is, Which do I prefer? I think the book and film are a dead tie. I like elements in the book but I also like elements in the film. Mostly though both just make me angry, the parents are completely selfish and I cannot believe any doctor allowed them to conceive a child with the knowledge she would be a human guinea pig. Anywho that is really here nor there....Definitely pick up the book if you haven't read it. If you have I suggest renting the film because certain changes will probably make you mad.

Leave your answers in the comments below, I love to read your responses.Like what you see? Please share!
Book To Movie Conversions Book to Movie Monday Drama From Page To Screen Jodi Picoult My Sister's Keeper Trailer