- May 08, 2013
Welcome to my stop on the Shadow Chaser blog tour hosted by YA Bound.  Click HERE to see the full blog tour schedule! 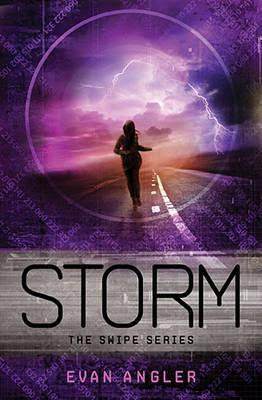 Logan and his friends are the leaders of the Markless revolution. But while some Markless are fighting Chancellor Cylis' army, the Dust is busy trying to find a cure for a horrible epidemic sweeping through the Marked. And it's difficult for them to know who to trust, especially when they aren't sure if Logan's sister Lily, one of the commanders in Cylis' army, is on their side or not. And all across the nation--and the world--the weather is become less stable, and a storm is brewing that bigger than any of them could have ever imagined....

Dear Reader,
Can you keep a secret?
For the launch of my latest banned book, STORM, I am doing something that I’ve never done before: I am releasing a series of deleted scenes. Scenes that are cannon, that did happen, and that simply didn’t fit on the page. What follows here is an exclusive first look at one of my very favorites--a scene in which Lily Langly discusses Beethoven during a tense meeting with none other than Chancellor Cylis himself.
So why am I doing this, you ask? Why am I publishing this deleted moment?
Perhaps it is just one more way to stick it to DOME. As if a third Swipe novel weren’t enough to ruffle their feathers, now I’m insisting on sprinkling it with bonus material too. Take that, Chancellor Cylis! How do you like me now?
But no. That’s not the only reason. That’s not all.
Because the truth is, it’s my hope that the scene you are about to read will inform the story of STORM, will complement it, will add to it and enhance it once all is said and done.
Because one way or another, a storm is coming. And it threatens everything we’ve ever fought for, all this time. And the more we know before it hits, the better.
Because right now, we Markless need all the help we can get.

The man’s hair was short and parted neatly to the right, with white streaks at its sides but an oaky brown on top. He had a wide smile and deep-set, blue eyes, and he was handsomer than he deserved, given his age. Chancellor Cylis had arrived.
“Beethoven,” he said, after a moment. He waved his hands as though through the wash of music itself. “Are you familiar?”

Lily paused. She looked at the Chancellor uncertainly. "Sir?"
"Beethoven. It is a simple question."
Lily cleared her throat. "Pre-Unity music is banned, sir. You've…you've banned it."
Cylis nodded from his thrown, lost in the sounds of the orchestra. "Symphony No. 7,” he said. “The Allegretto. Instantly popular at the time of its premiere, and a favorite of mine, these many hundreds of years later.” Cylis listened for a moment. Lily smiled, uncertainly.

“Every note, deliberate. Every permutation of this great, simple melody, explored to its riches, fullest capacity. It is an exercise in minimalism, a hundred years before such was the fad among concert music. Listen!” Cylis exclaimed. “The way he confined himself so, the way he stuck with these two notes, this one rhythm, the way he juggled it, over and over, across measures and inversions and harmonies and instrumentation. Do you hear it?” he asked.
“I do, sir.”

“Years, he spent. Years with that melody, jotted so simply in his notebook, before he ever dared put it on stage. Years. Years of hearing it, privately, the sounds filling his head, intermingling with each and every thought. Years before he finally let it out in its realized form. A lesser man might have composed a melody such as this, no doubt. But to sit with it, for so long...to allow that idea to grow, gestate, flower in its own time, in its own way...this is how its greatness was achieved. It is a melody heard from every angle, examined in every context. It is not the idea—it is never the idea—that takes time, that makes history....No. It is the execution of that idea. Do you follow me, Advocate Langly?”

“I do, sir, I think.”
“Do you know what a patience of that level, that discipline...do you know what it can achieve? Can you appreciate its worth?”
In fact, Lily did. She could. Completely. But she would not say so now. Not today. Not here.
“Well,” the Chancellor laughed. “I suppose the proof is in the pudding, isn’t it. It achieves this. This music. Unparalleled beauty. Elegance. An immortal creation, enduring forever beyond the creator’s life." Cylis frowned. "Please. Sit."

Lily did. And Cylis took a deep breath.
“Imagine! Here in the Chancellor’s palace. The famous Advocate, Lily Langly.”
In her seat, Lily trembled with some combination of excitement and fear. “Your Honor...”
“Your brother has caused quite a lot of trouble for me, Advocate.”
“Sir, I—I don’t know where to begin—”
“Ms. Langly, please!” the Chancellor held his hand up, as if some bright and irritating light had been shined at him. “Do you think I brought you all the way to Third Rome just to hear you beg for forgiveness?”
He let the question linger.

“Well I assure you I did not. I am not interested in apologies, Ms. Langly. I do not accept them. Ever.”
Lily stared at the plate of food in front of her.
“Your brother’s faults are not your own,” Cylis continued. “But they do affect you. As they do me. As they do this great Global Union.”
“Yes sir.”

“After ten years of Marked citizenry, Logan is the first to have aborted a Pledge. He is the first to have found Acheron. He is the first to have made his way inside of his own volition. And he is, quite certainly, the first to have escaped.”
“I tried to stop him, your honor. I turned him in. He was captured. As I left it, his threat was contained. I tried—”
“Enough! I know you tried! Do you think you’d be here had you not? Do you think you’d be alive had you not?” In the background, Beethoven swelled. “I am not angry with you, Advocate—I am impressed. The courage you showed in betraying your brother, in putting Lamson and myself above family...this is the loyalty I look for, these are the traits of only the very greatest of my soldiers. You have proven yourself worthy of a seat at my table. You are the equal of any IMP in my eyes, regardless of rank. Advocate Langly, you embody—the Mark.”

Lily smiled, in spite of herself. “Thank you, your Honor.”
“Do not thank me. My approval is not a gift. It is earned. And you earned it last month. Regardless of the...unforeseen circumstances of your brother’s subsequent escape.” Cylis crossed his legs, thinking on his throne.

Author Bio & Follow Links
Evan lives without the Mark, evading DOME and writing in the shadows of Beacon.
Swipe is his first book. But if anyone asks, you know nothing about it, and you didn't hear anything from him. Don't make eye contact if you see him. Don't call his name out loud. He's in enough trouble already.
And so are you, if you've read his book.

***Giveaway***
Win Paperback copies of Swipe, Sneak and Storm, US only.
a Rafflecopter giveaway