For this weeks From Page To Screen I have decided to cover Harry Potter and the Prisoner of Azkaban by J.K. Rowling. 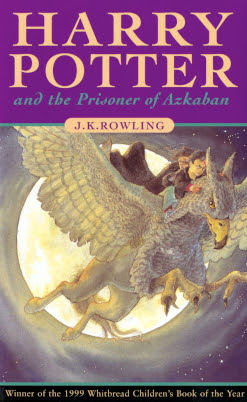 
Harry Potter- A 13 year old boy in his 3rd year at Hogwarts. Even though Harry was famous before he even knew he was a wizard, He steers clear of special treatment, flattery, and praise. Harry strives to live a normal wizard's life even amongst the chaos his life as The Boy Who Lived brings. Harry is very loyal to Dumbledore and also his friends. He also is courageous which sometimes leads him into difficult situations.

Sirius Black -  James Potter's best friend turned escaped convict from the wizard prison Azkaban. Sirius Black is suspected to be the cause of twelve Muggle deaths as well as the indirect cause of the deaths of Harry's parents. Sirius is Harry's godfather and an Animagus. His nickname is Padfoot (due to turning into a dog) and he is also one of the creators of the Marauder's Map.

In case some of you aren't familiar with the film, here is a bit of back story. Harry Potter and the Prisoner of Azkaban was directed by Alfonso Cuarón and was released May 31,2004 (June 4, 2004 in the U.S.) by Warner Bros. Pictures. Harry Potter and the Prisoner of Azkaban cost $130 million to make and went on to make $796 million worldwide. Prisoner of Azkaban opened to widespread critical acclaim and despite being the lowest grossing film of the series it still holds the record for being the fortieth highest grossing film of all time. Fun fact: The Honeydukes set  shown in Prison of Azakaban is a redress of the set of Flourish & Blotts that was seen in Chamber of Secrets, which, in turn, was a redress of the Ollivanders set from the first film.

The above mentioned are the major differences I noticed when the book was translated From Page To Screen. Due to the books size vs. the length of the film I'm sure I probably overlooked a few. Feel free to point them out in the comments below. Which however, Do I prefer? I have to give it to the book this week. While the film is stunning and I love all the actors it simply did not have a run time long enough to include some of my favorite moments from the book. At the time of release this book was the longest of the three and easily could've been split into 2 films or at least given an hour longer run time. Also I was still saddened by the loss of Richard Harris and I had a hard time coming to terms with Michael Gambon as Dumbledore. I highly suggest seeing the film if you haven't already but if you really want the best version of the story stick with the book.


Have you read the book or watched the film?
Which did you like better? Why?
What is your favorite quote or scene from Harry Potter and the Prisoner of Azkaban?
Just for fun: What animal would your Patronus be?

Leave your answers in the comments below, I love to read your responses. Like what you see? Please share!
Book To Movie Differences From Page To Screen Harry Potter and the Prisoner of Azkaban J.K. Rowling Trailer