From Page To Screen (46) Twilight: Eclipse

For this weeks From Page To Screen I have decided to cover Twilight: Eclipse by Stephenie Meyer.

Here's a bit of back story in case some of you aren't familiar with the novel. Twilight: Eclipse is a novel written by Author Stephenie Meyer. The book was originally published August 7, 2007 by Little,Brown. Twilight: Eclipse is the 3rd book in the Twilight Saga and follows Bella during her Senior Year. Twilight: Eclipse released to widespread critical acclaim and many critics agreed that this was due to Eclipse taking a more adult approach to the characters relationships. Twilight: Eclipse had a print run of a million copies and sold over 150,000 units on its release day. However, it did not stay at #1 long due to Harry Potter and The Deathly Hallows pushing it off the top spot.

Bella Swan- A teenage girl who lives in Forks. She is deeply in love with Edward Cullen who just happens to be a vampire. Bella continues to be conflicted about her feelings for her best friend Jacob. Her decision will change her life forever.

Edward Cullen- Bella's boyfriend. Edward a vampire is part of the Olympic Coven and only drinks the blood of animals though its implied he is very tempted by Bella's blood. Edward broods over Bella's relationship with Jacob. Ultimately forcing her to choose him by proposing marriage.

Jacob Black- Bella's best friend and also a Quileute Native American and werewolf. Jacob has deeply fallen in love with Bella and is pained that she doesn't return his affections completely. 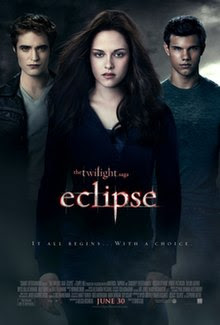 Now I know that this book has a bunch more changes but these were the ones I remembered standing out the most. You'll have to forgive me if I forgot any as it has been a few years since last reading the book. Which however do I prefer? As much as I love seeing a shirtless Taylor Lautner, this week I give it to the book. I think Bella is a little more likable on the page than on screen and you can really tell how deeply she loves Jacob and how Edward whether consciously or not keeps sucking her back to him. Definitely read the book if you haven't already and if you haven't watched the film yet you should do so at least once.

Still undecided? Check out the film trailer below!


Have you read the book or watched the film?
Which did you like better? Why?
What is your favorite quote or scene from Twilight: Eclipse?
Just for fun: Do you believe Bella should have chosen Jacob?

Leave your answers in the comments below, I love to read your responses. Like what you see? Please share!
Book To Movie Differences Eclipse From Page To Screen Stephenie Meyer Trailer Twilight Vampires