From Page To Screen (53) The Neverending Story

For this weeks From Page To Screen I'll be comparing the book turned film The Never Ending Story by Michael Ende.

Here is a bit of back story in case some of you aren't familiar with the novel. The Neverending Story is a novel written by Author Michael Ende. The Book was originally published in German in 1979 by Thienemann Verlag . It was later translated into English by Ralph Manheim in 1983.

Bastian Bux-  Bastian is a shy and bookish boy around 12 years old who is neglected by his father after his Mother's sudden death and bullied by his classmates. During a visit to an antique bookstore, he steals a book titled The Neverending Story, and upon reading it he finds himself literally drawn into the story.

Atreyu- Main character in the book that Bastian reads. Atreyu is a Greenskin Warrior summoned by the Childlike empress to embark on a great quest to find a cure for her illness thus helping save Fantastica from certain doom.

The Childlike Empress- Monarch of Fantasia, who resides in the Ivory Tower palace in the heart of the realm. Although she is the ruler of Fantasia, she does not command a political system nor does she enforce her authority. In actuality, the empress is the living embodiment of Fantasia's life force; should she die, Fantasia and all those who live in its realm would cease to exist.

Falkor- Friend of Atreyu and Bastian. Falkor is a luckdragon. He has an elongated, winged body that is covered in pink scales and hair that appear white in dull light. He is the only luckdragon to appear, although five others are mentioned in passing. Falkor helps assist Atreyu in his quest to find a cure for the Empress. 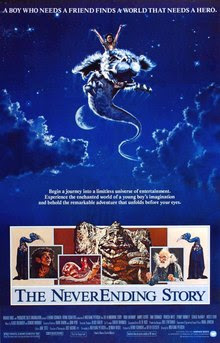 In case some of you aren't familiar with the film, here is a bit of back story. The Neverending Story is a film directed by Wolfgang Petersen and was released April 6, 1984 by Warner Bros. Pictures in the U.S. (Neue Constantin Film in Germany). The Neverending Story cost roughly $25 million to make and ended up grossing over $100 million worldwide. Oddly enough while the film did well domestically upon release it wasn't until a decade later that the film gained cult classic status. It is now considered one of the most beloved Children's movies ever made.


Main differences between the book and the film

These are the main differences I noticed when the book was taken From Page To Screen. Which however do I prefer? In all honestly I call this one a tie. While I love the book the film is a deeply ingrained part of my childhood. I still tear up every time I hear the theme song and that ending my goodness the feels (except that horribly stupid Yeah upon Falkor's back)!! I do believe the book did some things better. The Nothing is much,much scarier in the book and the whole quest to find a cure felt more dangerous as well. Also the movie only covers part of the book so it's not an entirely fair comparison I suppose. Overall though I can't recommend one over the other. You should definitely read the book and same goes for the film. Yep the film might seem "cheesy" compared to the special effects of today but it is still a damn fine film and one I encourage you to watch at least once.

Just for fun:
If you've seen the film, Do you still remember the theme song by heart?


Leave your answers in the comments below, I love to read your responses.