For this weeks From Page to Screen I have decided to cover The Mist by Stephen King. 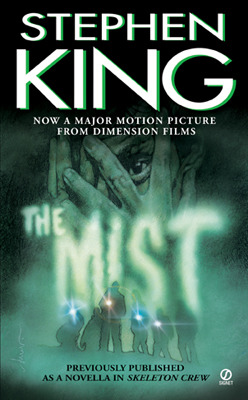 First let's discuss the book.
The Mist is a novella written by Author Stephen King. The Novella was originally released in the Dark Forces Anthology (Published by Viking Books) and was the Collections longest story. In 1985 Stephen King published a slightly edited version of the novella in his short story novel Skeleton Crew (Published by Putnam Books). After the film rights were sold it was decided that King would rework the story yet again to make it a full length stand alone novel. This was published October 2, 2007 to coincide with the films release.

David Drayton- David is a moderately successful commercial artist that lives in the town of Bridgton, Maine with his wife Stephanie and son Billy. He is the narrator of the story.

Mrs. Carmody- A middle-aged townswoman with a borderline reputation as a witch and a fanatical belief in God. She actively thrives on the helplessness of those trapped in the grocery store and uses this to her advantage.

Brent Norton- David's neighbor and a widower. He refuses to acknowledge the things happening outside in The Mist and eventually convinces a  small group of survivors to leave the grocery store with him. His fate is unknown. Brent accompanies David and Billy into town after his car was smashed by a tree the night before.

Ollie Weeks- The assistant manager of the supermarket. Ollie remains among the most sane of the survivors, accepting the truth about the mist and the creatures lurking within it.

Now let's discuss the movie.
The Mist was directed by Frank Darabont and was released November 21, 2007 by MGM.  The Mist cost $18 million to make and went on to earn $57 million worldwide.  Darabont conceived a new ending for The Mist after deciding that the original didn't fit with the overall theme of the story. Stephen King noted that Darabont's new ending would be unsettling for studios but that he liked it. King said, "The ending is such a jolt—wham! It's frightening. But people who go to see a horror movie don't necessarily want to be sent out with a Pollyanna ending."

The above mentioned are the major changes I noticed when the book was taken From Page to Screen. For the most part the novella and the film remain quite similar. So the film is certainly a faithful adaptation if anything. Which however do I prefer? This week I have to go with the film. While I certainly love the slow burn of the novella it is just so nice to see the monsters in the flesh so to speak and plus I simply love Marcia Gay Harden as the crazy religious lady. She pulls it off brilliantly. Definitely check out the novella if you want to read the story as intended but don't discount the film due to the changes in the end. While I prefer the way the novella ends the changes Frank Darabont made do work and come off quite shocking.


Have you read the book or watched the film?
Which did you like better? Why?
What is your favorite quote or scene from The Mist?
If you've seen the film did you notice all the eventual casted Walking Dead actors in it?

Leave your answers in the comments below, I love to read your responses. Like what you see? Please share!
From Page To Screen Horror Stephen King The Mist