From Page To Screen (59) Ender's Game

This week on From Page To Screen I tackle the book turned film Ender's Game by Orson Scott Card. 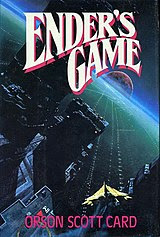 First let's discuss the book.
Ender's Game is a novel written by Author Orson Scott Card. The book originated as a short story which was published in the book Analong Science Fiction and Fact in August of 1977. However, it wasn't until 1985 that Ender's Game was turned into the novel (Published by Tor) we all know today. Ender's Game released to mostly positive reviews although some critics were turned off by Orson Scott Card's justification for the title characters violence in the book. As of 2013 Ender's Game has been published in over 33 languages.

Let's take a look at some of the characters.

Andrew 'Ender' Wiggin - Ender is brought into the International Fleet's Battle School for his immense potential as a commander of soldiers.  Ender is described as compassionate and kind but like his brother Peter he has a dark side and ultimately it is his ruthlessness that wins peoples unswerving faith in him as a commander.

Peter Wiggin -  Ender's elder brother. He has been rejected from Battle School for his ruthless and excessive ambition. Described as a Sociopath and a man devoid of humanity, Peter acts solely for his own benefit and, although he has a profound understanding of others, he uses his knowledge only to probe their weaknesses to his own advantage.

Valentine Wiggin -  Ender's elder sister. She has been rejected from Battle School for her overwhelming compassion. Although like her siblings she is not without fault. Valentine seeks power and control and will use it to her advantage any chance she gets.

Now let's discuss the movie.
Ender's Game is a film directed by Gavin hood. It was released November 1, 2013 by Summit Entertainment. Ender's Game cost $110 Million to make and as of writing this has grossed $79 million worldwide. Ender's Game opened to mixed reviews. The main reason amongst critics being that the film is more action based and less thought provoking than the book.


Although I'm quite aware of more changes these were the ones that were the most noticeable to me that didn't involve just battle school hierarchy. With that being said this week I don't even have to say more because the book is simply superior to the film. While I did highly enjoy Ender's Game on screen it really needed to be longer since compressed it had to cut a lot of story building and scenes between characters which I loved. Definitely read the book if you haven't already and if you like Science Fiction with lots of nifty CGI then check out the film as well.


Have you read the book or watched the film?
Which did you like better? Why?
What is your favorite quote or scene from Ender's Game?
Have you ever read the Manga version? If so, Do you recommend it?

Leave your answers in the comments below, I love to read your responses. Like what you see? Please share!
Action Ender's Game Fantasy From Page To Screen Orson Scott Card Science Fiction