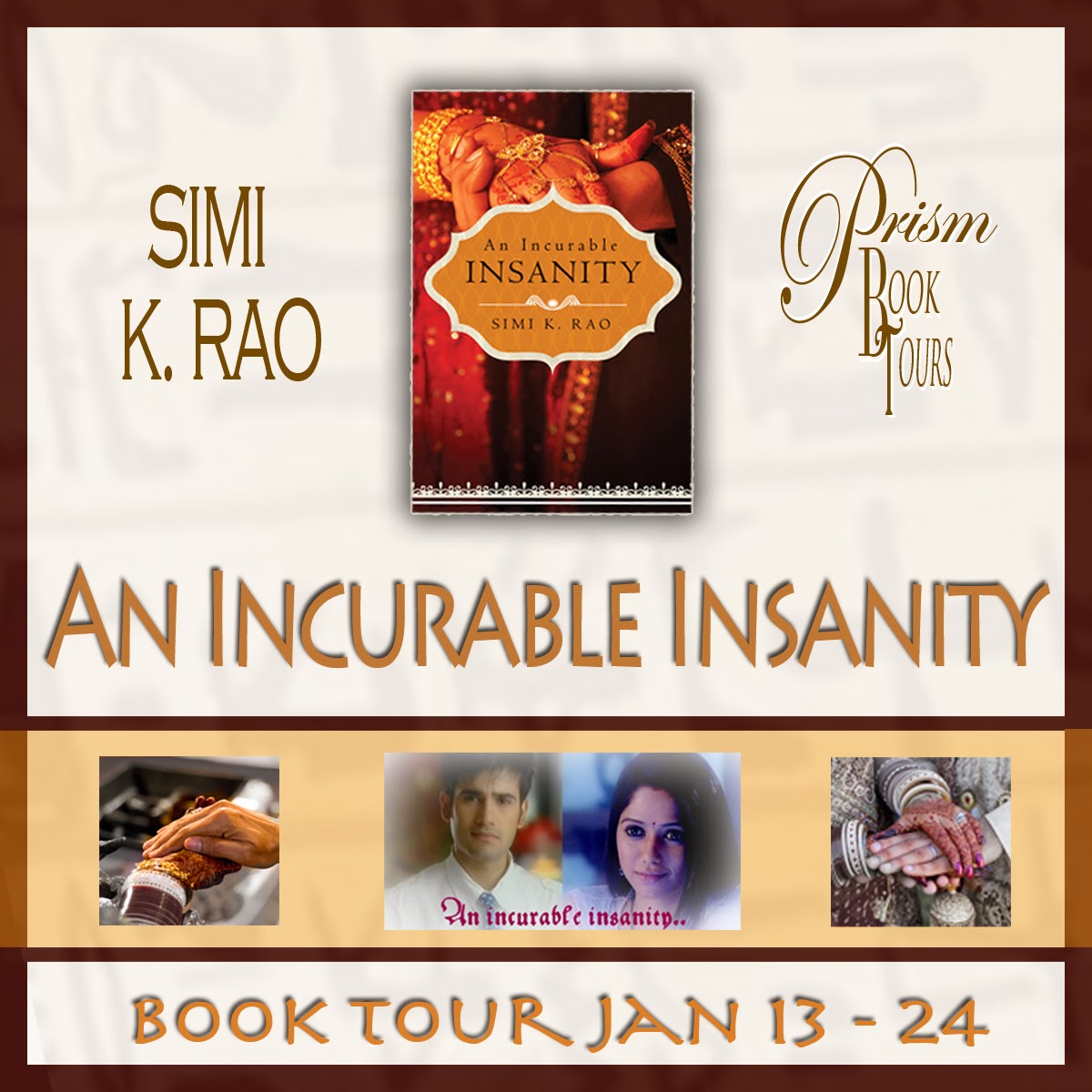 The Review Tour for
An Incurable Insanity by Simi K Rao!

We offer flowers in traditional welcome.
You are our honored guest...

You saw The Exotic Tour... you got a taste for the beautiful culture and the romantic attraction of our spunky young characters... now we've reviewed it and have shared the Prologue and first four chapters with you. Did you miss any of them? Read them now!

"Her heart fluttered when she heard the sound of the key turn in the lock. She quickly adjusted her maroon silk sari with the yellow border, the one that had caught his eye, and waited eagerly for his footsteps..."

"I wasn't impressed with Shaan at the beginning. We find out why he married Ruhi, which didn't paint him in the best light, either, but he shows a lot of growth and maturity as time goes on and redeemed himself to me in the end. There were some crazy, dramatic parts and also some calm, tender moments. I look forward to reading more of Ms. Rao's books in the future!"

"Ruhi closed her eyes; she could now repeat every movement, every word by rote. He was a creature of habit…and she was bored.

What was supposed to be the most exciting time in every young woman’s life had turned out to be the worst…Well, not really. He wasn’t mean. rather he was the perfect gentleman, too perfect!..."

My Love For Reading Keeps Growing  - Chapter 2, Part I and Review

"This really is a sweet love story.  I found it very hard to put down.  I love reading about different traditions and cultures, even if it's fiction.  I love how each MC talk to themselves in their head. We always make things out to be worse than they really are in our minds, and this book made me chuckle sometimes because there is a lot of "in head" struggle, fighting, and talking.  Silly things that make you want to find out if they are every going to get the nerve up to say to each other!"

"It goes without saying that the youngest Ahuja was by no means lacking in looks. He was unusually handsome, of good build, and above average height who liked to maintain an athletic physique with regular exercise. But despite being inundated with innumerable suitable matches, each willing to part with unbelievable amounts in dowry, he had steadfastly declined. In fact, he had even refused to pay a visit to his hometown until now. His hand finally being forced by the news of his dadaji’s terminal illness, whose final wish was to see his youngest grandson married and settled in life..."

"This was a great look into the life of married couples in India. It was a nice romance story that the author really showed the readers about India and all its customs."

Colorimetry  - Chapter 3, Part I and Review

"This book is a must-read for anyone interested in Indian culture!!  It's a thousand times better than any text book on the subject and should be a required compainion. Lol. It's similar to being immersed in the culture. It's also a must-read for romance lovers and everyone looking for something unique. And exotic."


“Son? Is it okay if I call you beta?” his father-in-law asked him; he had kind eyes.

Shaan looked over to his wife (what an odd-sounding word), and she mouthed a silent, “Please.” Then she smiled, her eyelashes drifting down in shy discomposure, carrying on as though this was one of the happiest days of her life..."

The happiness and relief was so immense that Ruhi wanted to jump up, grab her mother, and do a little dance around the room like she had done on the day she had won her first ever trophy at school..."

"I found this to be a gentle romance read set in Los Angeles, California and India. Being that I grew up in the L.A. area, it was a treat to read about some of the sights mentioned.

Things start off rocky with plenty of back-and-forth tugging of the heart and playful banter sprinkle these pages."

"Worth reading – the storyline is both humorous and sentimental, and I cared about the characters and what would happen to them. Ruhi in particular experiences a lot of personal growth as she adapts both to a new culture and the unexpected limitations of her marriage. (I was rooting for them to work things out, but you’ll have to read the book for yourself to see if that’s what happens!)"

Her heart fluttered when she heard the sound of the key turn in the lock. She quickly adjusted her maroon silk sari with the yellow border, the one that had caught his eye, and waited eagerly for his footsteps.

One, two, three, four, five, six, seven... Yes, exactly seven steps before he stopped, hesitated for a few moments, then removed his shoes one by one and arranged them neatly side by side on the shoe rack.

She smiled. He had been mindful of taking his shoes off every day now. "I am not used to it, but I will if you want me to. It's probably a good thing to do anyway."

As he settled down, he would pick up the TV remote and, without looking at her, would say in his smooth baritone, "So how did you spend your day, anything interesting?"

Shaan Ahuja found himself bowing to tradition and agreeing to an arranged marriage to the beautiful Ruhi Sharma. He went through the motions but had no intention of carrying through on his vows. His last foray into matters of the heart with an American girl had left him scarred and unwilling to try again. Thoroughly disillusioned and disgruntled he wasted no time in making his intentions clear to Ruhi on their wedding night. But, he was completely unprepared for what his new wife had in mind.


Simi K. Rao was born in India and has been living in the United States for several years. The inspiration for An Incurable Insanity came from what she has seen transpire among and within the immigrant community. Some of the experiences included are her own; some have been garnered from friends and casual conversations with acquaintances...

I am a physician–and to many I may appear serious and solitary. But once people get to know me better, they often think that I am frank, down to earth, with quite a quirky sense of humor. And that is what I bring to my writing—read and you shall see.

I was born in the dead center of India, but had the privilege of spending time both in the north and south. Therefore I have been able to sample and absorb to some extent the vastly diverse cultures and languages of both these regions (the very quality that imparts tremendous richness to our country’s heritage,) —a phenomenon perhaps not seen anywhere else in the world.

After immigrating to the United States in my early twenties and spending several years in this country, whenever I travel back to my homeland now, I find that I appreciate my roots a lot more. Still there is so much to see and learn, that a lifetime won’t suffice.

5 eCopies of An Incurable Insanity (International)

Are you a blogger and want to receive information about new tours? Go HERE.
Are you an author or publisher and would like to have us organize a tour event? Go HERE.
An Incurable Insanity Blog Tour Simi K. Rao