This week on From Page To Screen I'll be tackling Harry Potter and the Order of the Phoenix by J.K. Rowling. 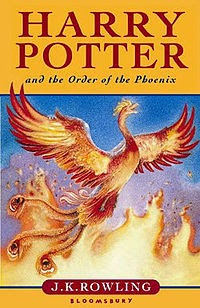 First let's discuss the book.
Here's a bit of back story in case some of you aren't familiar with the novel. Harry Potter and the Order of the Phoenix is a novel written by Author J.K. Rowling. The book was originally released June 21, 2003 by Scholastic (US) and Bloomsbury in the U.K. Harry Potter and the Order of the Phoenix follows Harry in his 5th year at Hogwarts. Within the first 24 hours of the books release over 5 Million copies were sold. On the critical front The Order of the Phoenix released to mostly positive reviews with most negative reviews citing concern for the noticeable increase in violence and Harry's moral wavering as reasons they didn't find Order as enjoyable as its predecessors.

Main Protagonists
Harry Potter- A 15 year old boy in his 5th year at Hogwarts. Even though Harry was famous before he even knew he was a wizard, He steers clear of special treatment, flattery, and praise. Harry strives to live a normal wizard's life even amongst the chaos his life as The Boy Who Lived brings. Harry is very loyal to Dumbledore and also his friends. He also is courageous which sometimes leads him into difficult situations.
Ron Weasley- Ron is the youngest brother of the Weasley clan. Although Ron grew up poor he was deeply loved by his family. However his poverty is a source of contention and he is prone to outbursts of anger when teased about his tattered robes and hand me downs. Ron is a pure blood but doesn't let that status go to his head. Like Harry Ron is also very loyal to his friends and family.
Hermione Granger- Hermione is a Muggle born wizard yet despite this she is top of her class at Hogwarts. Hermione is very self confident and loves to learn. While Hermione doesn't always approve Ron and Harry's actions she always stands by them out of love and loyalty.

Other Noteworthy Characters
Sirius Black -  James Potter's best friend turned escaped convict from the wizard prison Azkaban.  Sirius is Harry's godfather and an Animagus. His nickname is Padfoot (due to turning into a dog) and he is also one of the creators of the Marauder's Map. After the events in the Goblet of Fire, Sirius  .

Cornelius Fudge - After the events in Goblet, Fudge is concerned that Dumbledore is a threat to his power and that he is planning to train the Hogwarts students to overthrow the Ministry.  Fudge orchestrates a vicious smear campaign through the Daily Prophet to present Dumbledore as a senile old fool and Harry as an unstable, attention-seeking liar. After Harry is acquitted and allowed to return to Hogwarts he passes a law placing Dolores Umbridge, his Senior Undersecretary, as a teacher at Hogwarts. After Dumbledore's removal he appoints Umbridge as Hogwarts' "High Inquisitor" giving Fudge through Umbridge ultimate control of how the school is ran.

Main Antagonist
Dolores Umbridge - Defence Against the Dark Arts and later takes over as Hogwarts High Inquisitor after Dumbledore is removed as Headmaster. Umbridge is described as being a short, squat woman whom resembles a large pale toad. She speaks with a quiet, childish, high-pitched voice, and loves kittens, chocolate cakes, biscuits, tea and other cute things, decorating her office with related paraphernalia. She has a tendency to speak to people she feels are her lessers in a very condescending tone, as if they are simpletons or very young children. 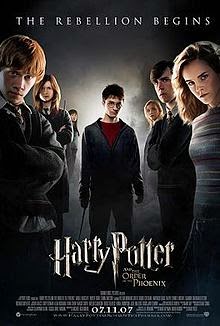 Fun Fact: Even though the book is the longest in the series (over 700 pages), the film is 138 minutes long (2 hours and 18 minutes), the second shortest in the entire film series

Well that about wraps up this weeks From Page To Screen. I'm sure I could easily nitpick the differences but instead chose to focus on those which were most noticeable to me when viewing the film. So which do I prefer? You know, I love the book, I do but the film slightly pulls ahead because I love the acting by as Dolores Umbridge. Perfectly cast in the role (in my opinion anyway). Definitely read the book if you haven't already. Lots of lovely details missing from the film can be found as well as clues to events bound to happen in the next book/film. Make sure to check out the film as well. Sure it might not be a perfect adaptation but the scenes with Dumbledore's Army not to mention the battle at the Ministry make up for most of that.

Have you read the book or watched the film?
Which did you like better? Why?
What is your favorite quote or scene from The Order of the Phoenix?

Leave your answers in the comments below, I love to read your responses. Like what you see? Please share!
Action Adventure Fantasy From Page To Screen Harry Potter and the Order of the Phoenix J.K. Rowling Magic Young Adult