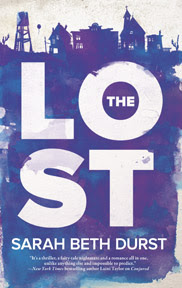 It was supposed to be a small escape. A few hours driving before turning around and heading home. But once you arrive in Lost...well, it's a place you really can't leave. Not until you're Found. Only the Missing Man can send you home. And he took one look at Lauren Chase and disappeared.

So Lauren is now trapped in the town where all lost things go-luggage, keys, dreams, lives-where nothing is permanent, where the locals go feral and where the only people who don't want to kill her are a handsome wild man called the Finder and a knife-wielding six-year-old girl. The only road out of town is engulfed by an impassable dust storm, and escape is impossible....

Until Lauren decides nothing-and no one-is going to keep her here anymore.

About the Author
Sarah Beth Durst is the author of seven fantasy novels for teens. Her latest, Conjured, came out in September 2013 from Bloomsbury/Walker. Prior to that, she released Vessel, Drink Slay Love, Enchanted Ivy, and Ice from Simon & Schuster, as well as Into the Wild and its sequel Out of the Wild from Penguin. Her first book for adults, The Lost, comes out in June 2014 from Harlequin/Mira. She was awarded the 2013 Mythopoeic Fantasy Award for Children's Literature and has been a finalist for SFWA's Andre Norton Award three times. Sarah has been writing fantasy stories since she was ten years old and holds an English degree from Princeton University, where she spent four years writing about dragons and wondering what the campus gargoyles would say if they could talk. She lives in Stony Brook, New York, with her husband and children. For more information, visit her at www.sarahbethdurst.com .
Adult Harlequin May 2014 Mira Mystery Review Sarah Beth Durst The Lost Thriller