Review: After the End by Amy Plum 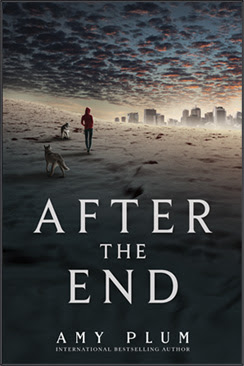 She’s searching for answers to her past. They’re hunting her to save their future.
World War III has left the world ravaged by nuclear radiation. A lucky few escaped to the Alaskan wilderness. They've survived for the last thirty years by living off the land, being one with nature, and hiding from whoever else might still be out there.

At least, this is what Juneau has been told her entire life.

When Juneau returns from a hunting trip to discover that everyone in her clan has vanished, she sets off to find them. Leaving the boundaries of their land for the very first time, she learns something horrifying: There never was a war. Cities were never destroyed. The world is intact. Everything was a lie.

Now Juneau is adrift in a modern-day world she never knew existed. But while she's trying to find a way to rescue her friends and family, someone else is looking for her. Someone who knows the extraordinary truth about the secrets of her past.

Amy Plum is the author of the International Bestsellers DIE FOR ME (Indie Next List pick, Romance Times top pick, and recipient of a starred review from School Library Journal), UNTIL I DIE, and IF I SHOULD DIE. The books have been translated into eleven foreign languages. The trilogy is accompanied by an eNovella entitled DIE FOR HER.

Amy grew up in Birmingham, Alabama before venturing further afield to Chicago, Paris, London and New York. An art historian by training, she can be found on most days either daydreaming or writing (or both) in a Parisian café. Visit her at http://www.amyplumbooks.com and check out Revenant Central on Youtube for videos and extras.
After the End Amy Plum Harper Teen May 2014 Review Science Fiction Young Adult