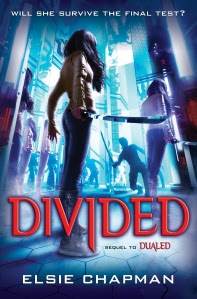 West Grayer is done killing. She defeated her Alternate, a twin raised by another family, and proved she’s worthy of a future. She’s ready to move on with her life.

The Board has other plans. They want her to kill one last time, and offer her a deal worth killing for. But when West recognizes her target as a ghost from her past, she realizes she’s in over her head. The Board is lying, and West will have to uncover the truth of the past to secure her future.

How far will the Board go to keep their secrets safe? And how far will West go to save those she loves? With nonstop action and surprising twists, Elsie Chapman’s intoxicating sequel to Dualed reveals everything.


Review
Divided by Elsie Chapman was a book I went into reading with much hesitation. Until I was invited to read the sequel I really had no intention of picking Divided up. I'm not gonna lie my experiences with the first book Dualed left quite an unpleasant taste in my mouth and I really had very little to no hope that the sequel would provide more of the same.

Yet,sometimes, despite all protestations to the contrary a books sequel can and will surprise even the most stubborn of readers. This was exactly my experience with Divided. It wasn't a perfect book, heck I didn't even like West in parts and yet, I couldn't bring myself to put it down. Funny how that works, isn't it?

One of the things I really enjoyed about the sequel was the pacing. Everything that happens in Divided takes place over the span of just a few days. Such a short time line kept the plot moving along at a brisk clip and since this was the sequel the narrative didn't need to be bogged down by character or world development.

Another thing I really enjoyed was the twist revealed around the 60% mark. I won't give it away but it definitely puts certain elements to the citizens willingly killing their alts in perspective.

Lastly, I think what I liked best of all was that I actually now feel reinvested in the series. The ending certainly left me curious and I want to know what happened to the Alts that West “killed”. Did they heed her advice and flee while they could? Or will they prove to be like their Idles and try to make an example of West deceiving them all?

Now as I mentioned above I did have some issues with Divided. While maybe not as many as the first book they did keep me from ultimately rating the story higher.

First off, I really disliked Chord this go round. He felt like a creeper to me and I didn't like how he always seemed to be pressuring West to be physical with him. Plus Chord always seemed to pop up at the most opportune moments. Simply put, I don't trust him and don't think West should either.

Secondly, I really am so over West being a martyr. Nobody wants to kill. She had a choice not to even if it meant dying herself. I'll just never get over how self centered West seems to be when it suits her and then plays the victim when it doesn't.

Lastly, I really wish we had at least some glimpse from the survivors in the surround. It was made pretty clear that the outside will play some role in the future so why not give us a taste for better or worse of what might lay in store?

Final Thoughts
Overall, I was glad that I decided to give Divided a go. The writing felt more polished this go round and the characters while certainly not perfect were at least tolerable to follow. No hesitation this time, I definitely recommend picking up Divided and giving it a go. With that being said, I'll be rating Divided by Elsie Chapman ★★★.

*Copy provided by Publisher. All opinions are my own and I was not compensated in any which way for providing them. 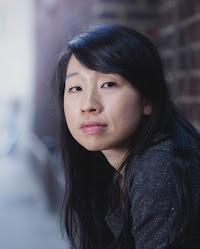 I grew up in Prince George, BC, before graduating from the University of British Columbia with a BA in English Literature. I currently live in Tokyo, Japan with my husband and two kids, where I write to either movies on a loop or music turned up way too loud (and sometimes both at the same time).

I’m repped by The Chudney Agency. My debut novel, DUALED and its sequel, DIVIDED are both available now. Published by Random House Children’s Books.