Warchild: Pawn by Ernie Lindsey [Purchase]
The world ended long before Caroline Mathers was born, but that doesn't mean life stops for the fourteen-year-old army scout for the People's Republic of Virginia.

Abandoned by her parents, raised by her grandfather, she slinks through the forests surrounding her encampment, monitoring the woods for nomadic bands of criminals known as Republicons, all while keeping a watchful eye on her northern enemies from the Democratic Alliance. It's a hard life, but a simple one, at least until the day Caroline hears the sound that everyone dreads: distant drums echoing throughout their quiet valley, pounding to the beat of the war rhythm.

With some help from two unlikely allies, Caroline leads her people in a breathtaking retreat, praying they'll find salvation in their capitol city. Along the way, haunting dreams may reveal a look into the mystery of her past.

The Sorcery Code by Dima Zales [Purchase]
Once a respected member of the Sorcerer Council and now an outcast, Blaise has spent the last year of his life working on a special magical object. The goal is to allow anyone to do magic, not just the sorcerer elite. The outcome of his quest is unlike anything he could’ve ever imagined – because, instead of an object, he creates Her.

She is Gala, and she is anything but inanimate. Born in the Spell Realm, she is beautiful and highly intelligent – and nobody knows what she’s capable of. She will do anything to experience the world . . . even leave the man she is beginning to fall for.

Augusta, a powerful sorceress and Blaise’s former fiancée, sees Blaise’s deed as the ultimate hubris and Gala as an abomination that must be destroyed. In her quest to save the human race, Augusta will forge new alliances, becoming tangled in a web of intrigue that stretches further than any of them suspect. She may even have to turn to her new lover Barson, a ruthless warrior who might have an agenda of his own . . .

Seventeen-year-old Connor Lewis is chased by a memory. On his first day of kindergarten he bit a boy hard enough to scar the kid for life. Since then he’s been a social outcast at a New York private school.

Through an unexpected turn of good fortune, he lands a scholarship to study in Paris, where everything starts to look up. On the first day he befriends two military brats, and he may finally get a taste of what it’s like to be a normal teenager.

His host family — an alluring young tattoo artist and her moody, handsome boyfriend — inadvertently introduce him to the underworld of werewolves where there are two types: the born and the bitten. Those born to it take the form of elegant wolves, while the latter are cursed to transform into the half-man, half-beast creatures of horror movies. The bitten rarely survive. Unfortunately, Connor is on the wanted list of a four hundred-year-old bitten human who’s searching for both a cure and a means of wiping out werewolves for good.

Connor’s loyalties are tested as he becomes embroiled in a conflict where werewolves, mad science and teen angst collide.

The Maze: Cadet Eppie Langtry navigates the cold and endless maze as part of the Academy's final training exercise. Her exploration leads her to a fellow cadet, and their combined curiosity triggers something no one expects--least of all the cadre running the maze.

What Little Remains: In a post-apocalyptic city, Kit ekes out an existence by tending to her rooftop garden. A rift in time brings her a new friend from the past--and something else far more menacing.

Inside Out: When Lexia befriends a girl from outside a luxury spa facility, she starts seeing the cracks in her mother's disastrous fifth marriage, the world in which she lives, and her own future.

Adventures in Funeral Crashing by Milda Harris [Purchase]
Kait Lenox has a reputation as the weird girl in her high school, mostly because of her ex-best friend turned mean popular girl, Ariel, but maybe it has a little to do with the fact that Kait has a hobby crashing funerals. At one of these, Kait is outted by the most popular guy in school, Ethan Ripley. Yet, instead of humiliating her for all the world to see, he asks for her help, and Kait finds herself entangled in a murder mystery. Not only is the thrill of the mystery exciting, but more importantly Ethan knows her name! A little sleuthing is well worth that!

The Reset by Daniel Powell [Purchase]
A young man with a terrible secret buried deep in his chest staggers through what remains of the American South. The destruction is total—the landscape scrubbed bare by the fires of the Reset. The sun rarely penetrates the daily ash storms, and the last of the Earth’s plants and animals are slowly dying out.

And yet, there are survivors. Benjamin Stone is one of them, and he’s searching for the only person who can share his pain, another who was biologically altered at birth to become a weapon capable of bringing the world to its knees. Outside of the few supplies that sustain him in his search for a new life, he has nothing.

Nothing but a will to survive and the desire to find someplace safe—someplace better. 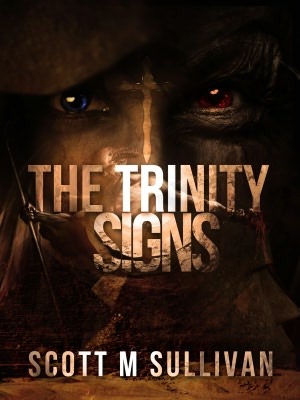 The Trinity Signs by Scott M. Sullivan [Purchase]
Once a millennium, humanity teeters on the edge of its unknowing demise. As the negativity in the world gathers speed - like an ominously dark boulder rolling down a steep cliff - so does it fuel the most evil of beings.

Yet, despite the inky shroud that foreshadows this dark presence, hope still exists of its eradication. Throughout the years this task has been quietly carried out by a group of loyal knights. The Guardians, as they were called, were bound by blood. They stopped the world from ever falling prey to what now comes. But time has ravaged their ranks, and now only one remains to fight against the many.

Tobias Ramsey, the last of these knights, must journey to locate the fabled Trinity Signs before evil's grasp on humanity becomes irreversible. As Tobias will come to realize, he has more to lose now than he ever had before.