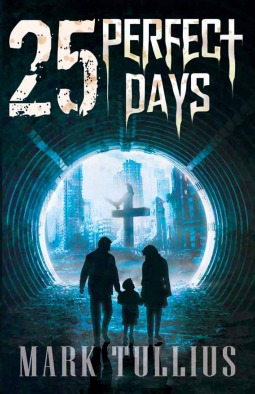 Higher taxes, strict gun control, an oppressive healthcare system. Complete media control, genetically modified food, experimentation on citizens. The push of depersonalizing technology, unending wars, government sanctioned assassinations. Is this collection of stories merely science fiction or soon to be fact? Are these policies designed for the greater good or disguised to benefit a chosen few at the expense of the masses? Is this brave new world the best we could do or part of a sinister grand plan?

Through these twenty-five interlinked stories, each written from a different character’s point of view, 25 Perfect Days captures the sacrifice, courage, and love needed to survive and eventually overcome this dystopian nightmare.

About the Author
I’m a father and a husband, a brother and a son. I’m an Ivy League grad who worked in a warehouse, an MMA fighter with too many defeats. I’m the bouncer and bodyguard, the drunk guy in the fight. The jailer and the jailed, the guilty and innocent.

I’m a writer shaped by influences, too many to count. I grew up on King and Koontz while force-fed the Bible. I narrate Dr. Seuss and Disney nearly every night. Like you, I've seen things I wished I hadn’t, heard some truths I won’t forget.

Writing is my heavy bag, the sparring partner that doesn't punch back. It's where I shed my armor and cast off the blindfold, take a look at myself and the world around me. The writing takes me wherever it wants. Dark alley or dinner table, classroom or morgue. I go along for the ride and try to capture the moment, show life like it is and let you be the judge.
25 Perfect Days Adult Dystopian Mark Tillius Review