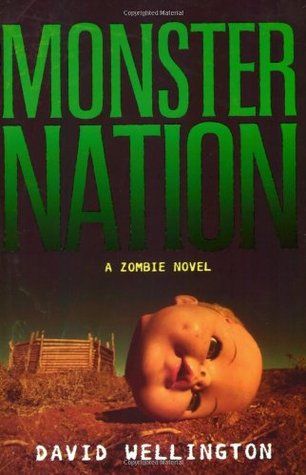 In the heart of America, in the world's most secure prison, something horrible is growing in the dark. A wave of cannibalism and fear is sweeping across the heartland, spreading carnage and infection in its wake. Captain Bannerman Clark of the National Guard has been tasked with an impossible mission: discover what is happening — and then stop it before it annihilates Los Angeles. In California, he discovers a woman trapped in a hospital overrun with violent madmen. She may hold the secret to the Epidemic but she has lost everything — even her name. David Wellington's first novel, Monster Island, explored a world overcome by horror and the few people strong enough to survive. Now he takes us back in time to where it all began — to the day the dead began to rise.

I recently acquired my copies of this series from my parents house during a trip back home in August. Since I've only read the series once and that being many years ago I figured now would be the perfect time to reread them.  What little I remember about the series I liked so I was really hoping to have the same reaction this time around. Unlike my first read through, I decided to read these in chronological order this time around. So without further ado here is my Reread review of Monster Nation by David Wellington.


Author Information:
David Wellington is a contemporary American horror author, best known for his Zombie trilogy as well as his Vampire series and Werewolf series. His books have been translated into eleven languages and are a global phenomenon.

His career began in 2004 when he started serializing his horror fiction online, posting short chapters of a novel three times a week on a friend’s blog. Response to the project was so great that in 2004 Thunder’s Mouth Press approached David Wellington about publishing Monster Island as a print book. His novels have been featured in Rue Morgue, Fangoria, and the New York Times.
David Wellington Monster Island Monster Nation Review Zombies