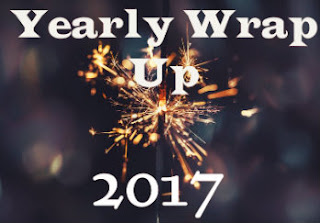 Hello Lovelies, I know it's been such a very long time but I couldn't end 2017 without doing a yearly wrap up of sorts. I wish I could say that this year was better than last (reading wise) but, nope,still woefully behind.  While I didn't really "read" many novels this year I did still read quite a bit. To bad fanfiction doesn't count on Goodreads because I fell down the rabbit hole of a site called Archive of Our Own and never really crawled back out successfully, lol. Seriously though I read so, so, many fanfictions this year they have to number in the hundreds at least. I also read a couple Graphic Novels. I just bought a new one actually right before Christmas but haven't started it yet. Figure I'll kick off 2018 with it.

Hmmm what else.... this year the only book turned film I went to theaters to watch was IT and I was so pleasantly surprised by how much I enjoyed it.  Let me know if you want me to do a Book to Movie comparison and I'll try and get that up. I also have been trying to get back into Animes. I kind of fell off during the summer for reasons I'll explain below but I am trying to find a balance now to do things I love such as blogging, reading, watching Anime etc.. and working. We'll see how things go by this time next year.

On a personal note 2017 was both amazing and hard. My father fell ill late April and then sadly passed at the beginning of May. I was able to return home before he passed but my kids and husband couldn't so it was very trying being alone through it all and then have to leave while so many things still needed attending just two weeks later. I'm doing much better though despite this being the first Holiday Season without the presence of my Father. In my heart I know he's in a better place than he was while hooked up to life support and in pain. On the lighter side of things in 2017 I traveled to so much this year and I loved, loved, loved it. On my own I went to both NYC (to see EXO in concert) and L.A. (attended KCON and saw many artists) and man what an amazing experience both of those were. Then in November my husband and I took a trip to Orlando for our anniversary and I'm not lying I cried the moment I walked into Diagon Alley at Universal Orlando. It was just an overwhelming sensation being in Harry Potter's world. Oh and I did buy a bunch of merchandise naturally including a Slytherin Robe, a badass death eater wand (I'm not bad OK but the wand looked really cool) and mugs galore.

So, hmm, I guess that's really it. I'm looking forward to whatever 2018 has in store and I hope to return to at least semi annual blogging. I love my website and hope to do better next year.