Horror Writers – Are We Really That Scary?
By
Rhiannon Frater


Two of the most famous modern day writers are Stephen King and Anne Rice. Both are iconic writers of many bestselling novels. They’re two of the rare authors that people actually recognize on the street. They’re rich, famous, well-respected, and adored.
And they’re both horror writers.
Because Anne Rice and Stephen King are well-known for their unusual habits, people do make a lot of assumptions about horror writers in general. Anne Rice has been known to dress up in extravagant costumes and mostly wear black. Stephen King has played in a rock band, acted in the films based on his books, and is generally considered an eclectic guy. Stephen King lives in a beautiful Victorian in Maine while Anne Rice resided in the French Quarter of New Orleans for most of her life. Reporters love to mention Anne Rice’s skeleton earrings or Stephen King’s penchant for saying some truly creepy stuff. One of his most famous quotes: “People want to know why I do this, why I write such gross stuff. I like to tell them I have the heart of a small boy... and I keep it in a jar on my desk.”
Is it no wonder people have certain ideas about horror writers?
I’ve had more than my fair share of people teasing me about bodies in the basement, living in a graveyard, eating the flesh of innocents, drinking blood, and all manner of other odd stuff. I won’t lie. It can get annoying, but I smile and shrug it off.
So for fun, I thought I would go down a list of commonly held notions about horror writers and see if I fit the bill. This list is derived from the many comments I’ve had aimed in my direction over the years.

Myth 1: Horror writers live in old Victorians.
Reality: I don’t live in a Victorian, but my house is a two story that many people think was built in the early 1900’s. It’s really a modern home, but it does have the aura of a much older one.

Myth 2: Horror writers live near cemeteries.
Reality: Actually, this is true. Very true. If the zombies rise, we’re going to be in trouble.

Myth 3: Horror writers are Goths.
Reality: This one is true, too. I’ve been Goth since I was a teenager a long, long time ago. I love my corsets, lace, and velvet. I can’t help it.

Myth 4: Horror writers are into creepy, satanic religions.
Reality: I’m actually a Christian. Not a fundamentalist though. My faith is very personal and important to me.

Myth 5: Horror writers are into things like bloodletting.
Reality: Ewww...blood…no! I like my blood to stay in my body. And everyone else should keep their blood in their veins!

Myth 6: Horror writers are mentally unstable.
Reality: I like to consider myself unusual and passionate. Eh, I’m lying. I’m crazy. I don’t hear just voices in my head. I have whole worlds!

Myth 7: Horror writers are only up at night.
Reality: I actually do write at night. It’s simply a lot quieter (both in the real world and on the distracting world of the internet).

Myth 8: Horror writers are raging alcoholics, drug users, etc…that’s how they get their ideas. When they’re smashed out of their gourd.
Reality: I dream most of my novel ideas. I do enjoy an occasional margarita, but that usually just makes me want to smooch my husband.

Myth 11: Horror writers have bodies in the basement!
Reality: I don’t have a basement. They’re in the backyard. *wink*

Myth 12: Horror writers are anti-social weirdos.
Reality: I have quite a nice set of friends, but I also tend to stay home a lot to write. Sometimes I have to be dragged out of my house kicking and screaming to be social. Yeah, I’m probably a weirdo.

In summation, in my own personal experience, I guess I do fit into the stereotype to some degree, but totally don’t in other ways. I do admit to loving all things gothic. My clothing, home, and decor reflect this. I do love exploring the macabre side of life in my writing.

But, in my defense, I want to state that I absolutely love lolcats. 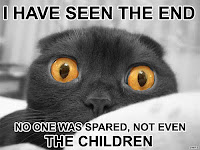 I want to Thank Rhiannon for Stopping by and for including Blood, Sweat and Books in her Tour. Please make Sure to check out all the other stops if you haven't done so already. Come back later today to check out my review of Siege.

Click The Banner Below For An Awesome Siege Giveaway