From Page To Screen (51) Flowers In The Attic

For this weeks From Page To Screen I'll be comparing the book turned film Flowers In The Attic by V.C. Andrews.

Here is a bit of back story in case some of you aren't familiar with the novel. Flowers in the Attic is a novel written by Author V.C. Andrews. The book was originally published November 1979 by Simon and Schuster. Even before publication the book was plagued with controversy due to the main characters having an incestuous relationship. However, this controversy might've been a good thing as the book has gone on to sell over 40 million copies worldwide.

Catherine Dollanganger-The protagonist and narrator of the novel. Cathy is the second child and oldest daughter of Christopher and Corrine. Cathy loves Ballet and dreams of becoming a professional dancer some day. During their time in the attic, she falls in love with her brother Chris.

Christopher Dollanganger, Jr.- Oldest son and child of Christopher and Corrine. Chris is the older brother of Cathy, Cory, and Carrie. He is an over-achiever and dreams of studying medicine. During their time in the attic, he falls in love with his sister Cathy.

Cory & Carrie Dollanganger-Twin brother and sister of Cathy and Chris and youngest children o Christoper and Corrine. Cory is described as the "quiet one of the twins" while Carrie is much more outgoing.

Main differences between the book and film 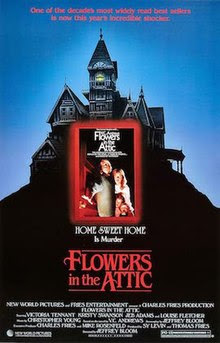 In case some of you aren't familiar with film, here is a bit of back story. Flowers in the Attic is a film directed by Jeffrey Bloom and was released November 20,1987 by New World Pictures. Wes Craven was almost chosen as the director for the film but was turned down by producers for his graphic and overly violent script. Flowers in the Attic went on to make $15 million worldwide and was considered to be a success. A sequel was planned with all Actors on board to reprise roles but never made.  However, it has been announced that a Remake is currently in pre-production with Heather Graham playing Corrine and academy award winner Ellen Burstyn in the role of Olivia the children's Grandmother.


These are the major differences I noticed when the book was taken From Page To Screen. Which however do I prefer? While I really love the film version I do believe this week the clear winner is the book. The film in many ways toned down the violence towards the Children which is understandable but nonetheless missed. Yes the book is brutal and often times uncomfortable to read but it is brilliantly told. Definitely check out the book if you haven't already and same goes for the film.

Just for fun:
If you've read V.C. Andrews before, What is your favorite book?


Leave your answers in the comments below, I love to read your responses.
Book To Movie Differences Flowers in the Attic From Page To Screen Gothic Horror Thriller Trailer V.C. Andrews Young Adult