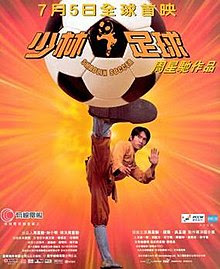 Bend It Like Beckham is a 2002 Comedy Drama starring Jonathan Rhys Meyers, Keira Knightley and Parminder Nagra. Bend It Like Beckham is about an 18 year old daughter of Punjabi Sikhs living in London who secretly joins a Women's Team  despite cultural and parental pressure forbidding her to do so. This is the film that really kicked off my love for the sport and holds a special place in my heart for that reason.

Mean Machine is a 2001 British Comedy starring Vinnie Jones, Danny Dyer and Jason Statham. Mean Machine is about  a guy named Danny who was banned from football for life for fixing a match between England and Germany. After wallowing in his sorrows at the local pub, Danny assaults two police officers and is sentenced to three years in Longmarsh prison. Events inside the prison lead Danny to Coach inmates in the sport of Soccer leading to a game between the prisoners and Guards. Basically the film is a Soccer version of The Longest Yard however if your a fan of Vinnie Jones than this is one you don't want to miss.

Gracie is a 2007 Historical Sports Drama starring Carly Schroeder, Elizabeth Schue and Dermot Mulroney. Gracie is loosely based on the life of Elizabeth Schue and tells the tale of Gracie Bowen the only girl in a soccer-mad blue-collar family in New Jersey. When her older brother is killed in an accident, Gracie decides to make his dream of beating the rival team come true by taking his place on the team.


Also check out, Kicking and Scream starring Will Ferrell and a young Josh Hutcherson , The Damn United starring Michael Sheen, She's The Man starring Amanda Bynes and Channing Tatum as well as the Documentaries Pelada , Kicking It and  The Referee.

I hope you enjoyed some of my World Cup movie recommendations.

Have you seen any of the films listed above?
If so, which one(s)?
Any not listed you recommend I watch?

Leave your answers in the comments below! I love to read your responses.