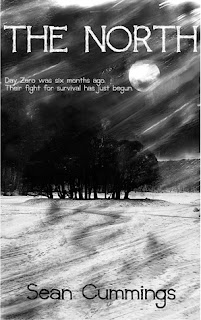 The North by Sean Cummings
Expected Publication: October 6, 2014
It's six months past the end of the world . Their fight for survival has just begun.

Sixteen-year-old David Simmons is on a mission to save his eight-year-old sister. In a smoldering world infested with walking cadavers, the survivors of Simmons infantry reserve unit are going hatches down in a pair of armoured personnel carriers and everyone knows that it's only a matter of time until their fuel runs dry.

There's a weak short wave radio signal from a place called Sanctuary Base and it's supposed to be zombie-free. But there's more than a thousand miles to cover, a biting, unforgiving cold, armed survivalists, legions of the living dead and someone called SUNRAY.

They're outgunned, outnumbered and out of time.

This tense thriller for teens offers a terrifying and brutal vision of survival in a post-apocalyptic world where the bonds of friendship and family are the only things left that are worth fighting for.

Why I'm Waiting: I honestly don't read much military based Zombie stories but this one sounds really good. Plus I'm sort of curious to see how they handle the escape from the Island. You have a bunch of military trained guys should be easy, right? 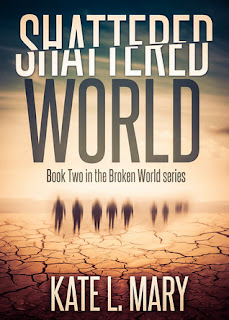 Book 2 in the Broken World series...

Stranded in the middle of the Mojave Desert, surrounded by zombies, Vivian and Axl are sure they’re facing the end. The dead are closing in and the shelter they were promised is sealed tight. Just when they think they’ve run out of time, the doors are thrown open. Five years underground with all the provisions there for the taking. It’s almost too good to be true. With the promise of security, Vivian hopes she’ll finally able to deal with the loss of Emily, her growing feelings for Axl, and the terrifying new world they’re facing.

But their sense of security is soon shattered when they discover the shelter isn’t the utopia they thought it would be. It seems the company that built the shelter decided to solve their financial problems by selling off provisions, which means the group has to find a way to get supplies. Or face starvation.

And Vegas is the closest city.

With her feelings for Axl stronger than ever, Vivian volunteers to accompany him and a few others on a trip into one of the biggest tourist cities in the world. Vegas is overrun with zombies, but there are other survivors as well. Only not everyone they meet is a welcome sight. As the emotional baggage piles up, Vivian and Axl’s bond grows, but it doesn’t take long to realize that zombies aren’t the only thing they have to fear.

Why I'm Waiting: I was a big fan of the first book Broken Worlds so I can't wait to see where the story goes in the sequel!

Well that about wraps up this weeks Zurvival Saturday. Like what you see? Please share! I thank you if you do.  Want to check out past Zurvival Saturday's? Click Here
Broken World Kate L. Mary Sean Cummings Shattered World The North Upcoming releases Waiting on Zombies Zombies