It's time again for Trailer Tuesday. This week I am Showcasing Lichgates by SM Boyce and Where She Went by Gayle Forman.

The Grimoire turns its own pages and can answer any question asked of it, and Kara Magari is its next target. She has no idea what she's getting herself into when she stumbles across the old book while hiking a hidden trail. Once she opens it, she's thrown into Ourea: a beautiful world full of terrifying things that all want the Grimoire's secrets. Everyone in this new world is trying to find her, and most want to control her.

Braeden Drakonin grew up in Ourea, and all he’s ever known of life is lying. The Grimoire is his one chance at redemption, and it lands in his lap when Kara Magari comes into his life. He has one question to ask the book – one question that can fix everything in his broken life – and he’s not letting Kara out of his sight until he gets an answer.

There’s no escaping Ourea. There’s no going back now.

Now living on opposite coasts, Mia is Juilliard's rising star and Adam is LA tabloid fodder, thanks to his new rock star status and celebrity girlfriend. When Adam gets stuck in New York by himself, chance brings the couple together again, for one last night. As they explore the city that has become Mia's home, Adam and Mia revisit the past and open their hearts to the future - and each other.

Told from Adam's point of view in the spare, lyrical prose that defined If I Stay, Where She Went explores the devastation of grief, the promise of new hope, and the flame of rekindled romance.


If you'd like to participate in this or any future Trailer Tuesdays. Grab the Button below and make sure to link me in the comments so I can check yours out as well. 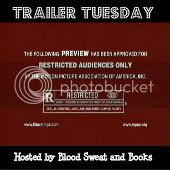